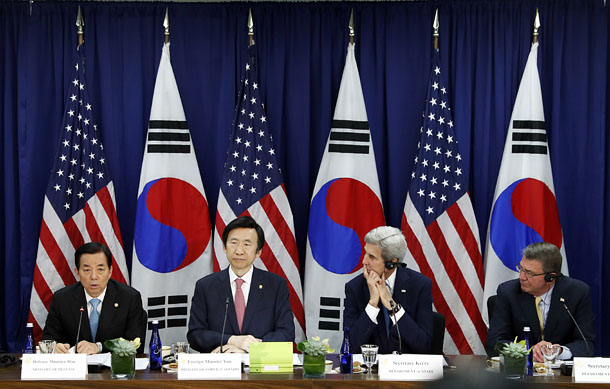 U.S. Secretary of State John Kerry said he is confident the new president of the United States will remain focused in tackling the North Korea challenge, following a bilateral diplomatic and defense dialogue between Seoul and Washington that emphasized extended deterrence against Pyongyang.

The “two-plus-two” dialogue between Korea’s Minister of Foreign Affairs Yun Byung-se and Minister of National Defense Han Min-koo and their U.S. counterparts, Secretary of State Kerry and Secretary of Defense Ashton Carter, took place Wednesday in Washington where they discussed their nations’ alliance and how to counter Pyongyang’s nuclear and missile threats.

In a joint statement by the four officials, Carter and Kerry reiterated the “unwavering U.S. commitment to draw on the full range of its military capabilities, including the U.S. nuclear umbrella, conventional strike and missile defense capabilities, to provide extended deterrence.”

“Let me be clear,” said Kerry in a joint press conference with Yun at the State Department afterward, “any attack on the United States or its allies will be defeated, and any use of nuclear weapons will be met with an effective and overwhelming response.”

“Even with the transition to a new administration taking place in the next months,” said Kerry, “I am absolutely confident without any question whatsoever that whoever is president of the United States, they’re going to have to be and will be very, very focused on this particular challenge, which is one of the most serious that we face globally.”

There is also an ongoing negotiation, he said, for “additional measures of sanctions at the United Nations, discussing how to deal with the livelihood loophole that’s in the last resolution,” in reference to the toughest-ever sanctions against the North, UN Security Council Resolution 2270, implemented in March.

The ministers and secretaries discussed efforts to encourage third countries to review their relationships with Pyongyang and noted countries with North Korean laborers have a “responsibility” to ensure their overseas wages will not fund North Korea’s nuclear and ballistic missiles programs. Seoul and Washington also agreed to establish a new high-level Extended Deterrence Strategy and Consultation Group (Edscg), to be co-chaired by the four ministries.

Yun described how high-level diplomatic and military officials will provide insight through this new group and address core matters of deterrence, including diplomacy, information, military and economic sanctions.

This Edscg body, the Korean top envoy said during his joint press conference with Kerry, would provide Seoul and Washington “with a multilayered mechanism that facilitates military and strategic consultations as well as covering strategic and policy problems on extended deterrence.”

Yun added that the two sides “recognized the need to accelerate change in North Korea” and take a “holistic approach” in addressing issues there “ranging from human rights abuses, including overseas slave labor, as well as facilitating the flow of information into the North.”

North Korea’s nuclear and missile program is “now a direct threat to the mainland U.S.,” Yun warned, stressing that “the next few years will be the tipping point” and that its allies “have agreed to use all available tools in the toolkit and beef up pressure and sanctions vis-a-vis North Korea in a continuous and multidimensional manner.”

The 48th U.S.-Korea Security Consultation Meeting, or SCM, between Carter and Han was scheduled for Thursday at the Pentagon. Discussion about the permanent deployment of the U.S. strategic assets close to the Korean Peninsula was expected to take place in this meeting, Yun said.

North Korea again fired an intermediate-range ballistic missile - presumed to be a Musudan missile, which has a range of up to 4,000 kilometers (2,485 miles) and is enough to reach U.S. military installations in Guam - from the northwestern city of Kusong in North Pyongan Province at around 7 a.m. on Thursday.

According to the Joint Chiefs of Staff, the launch, thought to be the eighth Musudan missile launch by North Korea this year, ended in failure. Pyongyang’s most recent Musudan missile before this was launched five days earlier on Saturday, also from Kusong, and exploded mere seconds after taking off.

South Korea’s Ministry of Foreign Affairs “strongly condemned” the failed intermediate-range missile launch on Thursday. Cho June-hyuck, spokesman of the ministry, said, “Regardless of its success or not, it is a clear violation of UN Security Council resolutions and poses a severe threat to the peace and security of the Korean Peninsula.”