Convenience stores making it even easier

Convenience stores making it even easier

From left: Smile Box allows consumers who make purchases through Gmarket or Auction to pick up the packages at a nearby GS25 that has a Smile Box; CU merged karaoke service into its Hongdae branch, which offers more than 1,000 options to its visitors who come to dance and sing; Shinhan Bank launched a self-service kiosk that issues debit cards and allows for online banking at CU stores in June. [GS25,CU]

Convenience stores are no longer a destination merely for food and refreshments. These days, they’re part supermarket, part restaurant, part charging station and even bank or singing room.

Service providers are poised to tap into the expanding accessibility of convenience store chains, seeking to mesh their services into the store.

“Expanding the number of branches has its limits in Korea and is poised to slow down in the coming years,” says Oh Lina, an analyst from eBEST Investment & Securities. “Convenience stores are seeking to compensate for the slow growth in number of operations by jumping into diverse new businesses.”

Labeled Smile Box, the service allows consumers who make purchases through Gmarket or Auction, to pick up the packages at a nearby GS25 equipped with a Smile Box. The service is intended to lessen the inconveniences of not being present when packages are delivered.

When the item is delivered, a password is sent to the consumer and if typed in at the store’s box, it produces the ordered product. Returning the product is even handier. Customers can drop the item into the box and notify the delivery service.

Convenience store 7-Eleven, operated in Korea by Lotte Group, launched a similar service in July under the name Smart Pick. 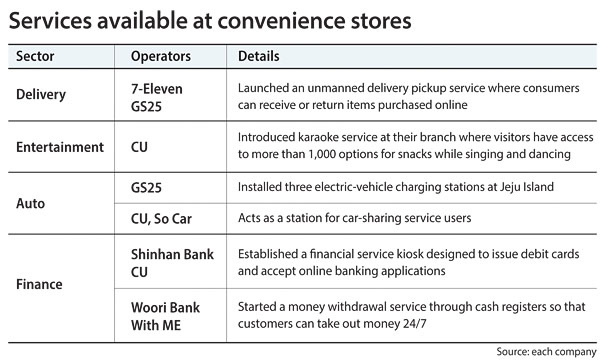 Merchandise purchased on online channels affiliated with Lotte, such as Lotte.com and L Lotte, can be picked up at nearby 7-Eleven branches. The return service is also convenient. Dropping packages at the selected 7-Eleven branch is all that is needed.

With the rapid growth of car-sharing and electric car business, convenience stores are also jumping on the bandwagon.

CU, a convenience store franchise run by BGF Retail, signed a deal with car-sharing service So Car to provide parking platforms at their branches.

The most vital factor for the car-sharing network is to provide as many stopping stations as possible so the driver doesn’t have to drive far from the ultimate destination just to return the vehicle.

That’s when the convenience store comes in, which can be spotted on almost every block. CU said it is testing the service in two of its branches: one in Dongsoong-dong in Jongno District in central Seoul and the other in Yongin, Gyeonggi areas with a relatively high demand for car-sharing services.

GS25 has snatched another blue ocean in the auto business by agreeing to provide electric vehicle (EV) charging stations. In Jeju Island, which has nearly 40 percent of all registered EVs in Korea, three branches of the convenience stores are equipped with charging stations.

Among others, CU has taken one of the most innovative approaches to their services.

Since July, one of its branches in the bustling Hongdae neighborhood in western Seoul transformed itself into a karaoke bar, after partnering with Su, a karaoke franchise with some 20 branches nationwide. Taking a “cultural approach” to their customers, the Hongdae branch has a convenience store on the first floor and karaoke on the second. Unlike other karaoke bars, which offer limited snacks and drinks, here, visitors can choose from 1,000 items in the store.

Daily visits are two or three times higher than its other Hongdae branches. A BGF Retail spokesperson said the franchise is considering expanding the service.Banks also are seeking to expand in convenience stores, introducing services that typically would require interacting with staff during normal branch hours.

Shinhan Bank launched a self-service kiosk that issues debit cards and allows for online banking at CU, in June. The machine is at CU’s Seoul National University branch in southern Seoul. “The kiosk took it a step further because it offers services only available at branches,” a spokesperson at Shinhan Bank said.

“But we figured that many of our customers would find it convenient to have the additional transactions and services at convenience stores as well so that they can get access to the services on weekends or night time.”

The spokesperson said that the project is in the pilot stages, with plans to expand the number of the machines after reviewing consumer response. He declined to reveal the average number of daily users.

The self-service machine also allows bank clients to change their passwords on their accounts and cards, a function that previously required a bank visit.

To confirm identities, the platform deploys biometrics based on fingerprints and iris recognition. Shinhan is not alone in looking at convenience stores as an alternate service platform.

Woori Bank introduced a money withdrawal service that is attached to a cash register at 16 With Me convenience stores in Seoul, Gyeonggi and Daegu. While many of the ATM machines are out of service from midnight through dawn, the cash register service allows users to access money 24 hours a day. Commission fees are 900 won ($0.79).

“The system will let users input their password and the convenient store worker will hand out money,” said a Woori Bank spokesperson.

The bank said that it will extend the sites as well as expand its partnership with other convenience store chains.