Pororo back on North’s TV screens

Pororo back on North’s TV screens 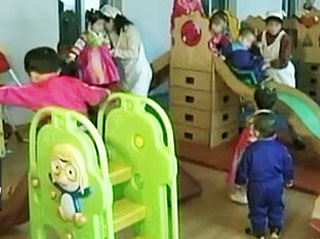 Pororo, a popular South Korea animated character, appeared Thursday on Korean Central TV, the state-run broadcaster of North Korea. KCTV was airing a special program introducing Pyongyang Children’s Department Store. One of mothers watching children at a playground inside the store was spotted on camera with a bag with a Pororo doll attached to it.

This was the second time Pororo appeared on KCTV. Pororo was first spotted in 2014, when a playground slide decorated with the character was broadcast unedited. This was during a report on a childcare facility in Pyongyang, which North Korean leader Kim Jong-un was visiting.