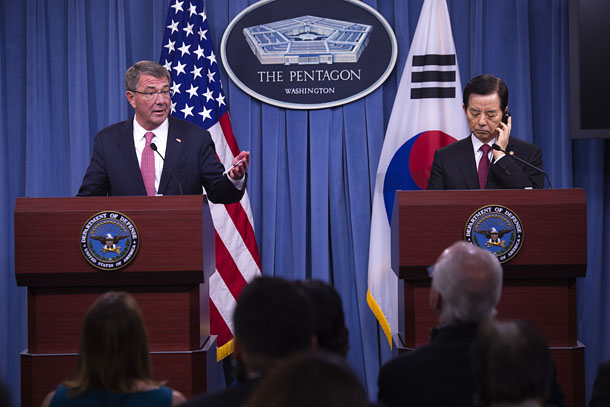 At the 48th Security Consultative Meeting held at the Pentagon, the two chiefs agreed to bolster naval cooperation, cyber defense capabilities and trilateral exercises including Japan amid North Korea’s continued provocations, including its fourth and fifth nuclear tests in January and September this year.

Minister of National Defense Han said in a joint press briefing after the meeting that he and Carter “discussed various measures to promote effective execution capabilities of extended deterrence measures on the Korean Peninsula” to respond to Pyongyang’s escalating nuclear and missile threats. He added there will be “additional review” for specific measures.

“The United States commitment towards the Republic of Korea ensures that any North Korean attack will be met with failure,” said the minister.

However, a decision was not reached on the deployment of strategic assets permanently on a rotational basis on the Korean Peninsula during this meeting, as South Korean officials had initially forecast.

There were reports of the possible permanent stationing of U.S. strategic assets on the Korean Peninsula such as the B-52 Stratofortress strategic bomber, B-1B Lancer bombers or F-22 Raptor fighters.

“The United States remains committed to defending our allies against any threat with the full spectrum of American military might,” said Carter in the joint press conference. “And that’s why we’re ensuring we remain ready to, as we say, ‘fight tonight.’”

Washington, he said, “is reaffirming its ironclad commitment to defend South Korea with our extended deterrence capabilities.”

The defense chiefs in their meeting assessed the stability of Kim Jong-un’s regime, along with North Korea’s nuclear and missile capabilities and its conventional forces.

Han said, “We have agreed to strengthen our stalwart combined defense posture so that we may respond to any North Korean provocation.”

The two sides agreed to establish an integrated research team, also including the Joints Chiefs of Staff and Navy, to respond to maritime threats posed by North Korea, including intercontinental ballistic missile, or ICBM, launches.

The defense chiefs also assessed there was “significant progress” in trilateral cooperation among Seoul, Washington and Tokyo and said they will continue to develop this relationship in 2017 and would also continue with joint military drills that involve trilateral intelligence sharing.

The previous day, the two defense chiefs, along with Korea’s Minister of Foreign Affairs Yun Byung-se and U.S. Secretary of State John Kerry, engaged in a “two-plus-two” dialogue and agreed to establish a new high-level Extended Deterrence Strategy and Consultation Group to discuss policy on extended deterrence.

North Korea on Thursday launched an intermediate-range ballistic missile, presumed to be a Musudan missile, from the northwestern city of Kusong in North Pyongan Province, which ended in failure.

During the press conference, Carter condemned that launch and said, “This latest provocation only strengthens our resolve to work together with our Republic of Korea allies to maintain stability on the peninsula.”