Pyeongchang, a sleepy town of about 10,000 people nestled in the heart of the Taebaek Mountains, is known for producing tobacco, silk and honey. But soon it will be known for one thing more - beginning what International Olympic Committee (IOC) President Thomas Bach has called the “time of Asia,” a period when East Asia will host the next three Games.

This will put Asia in the klieg lights of sports celebrity, but before the 2022 Winter Games in Beijing, or the 2020 Summer Games in Tokyo, it all starts with the 2018 Winter Games right here in Pyeongchang. And with less than two years until the cauldron is lit in this little ski town 126 kilometers (78 miles) east of Seoul, concerns are already mounting over the makings of Korea’s second Olympics.

There are of course the usual suspects, such as anxiety about the venues and housing, but one issue unique to Pyeongchang - particularly when set aside Tokyo and Beijing - is accessibility. Charming and attractive though it is, Pyeongchang is remote. From Incheon International Airport, it’s about 250 kilometers across the peninsula, almost to the coast, which means a three-and-a-half hour trip by car. For anyone considering such a trek after alighting from an extended flight, this may be a bridge too far.

But this will not be the case during the coming Games, as the Korea Train eXpress (KTX), the country’s high-speed rail system, which travels at about 300 kilometers per hour, will by then hopefully link Incheon and the coastal city of Gangneung, just east of Pyeongchang. 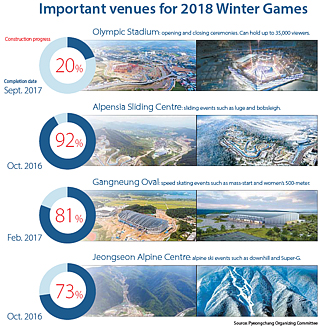 The Ministry of Land, Infrastructure and Transport’s plan to link these cities will reduce the travel time to around 90 minutes. The ministry said they have divided the project into two sub-plans, revamping the already-existing tracks from Incheon through Seoul to Wonju while constructing a double track high-speed railway from Wonju to Gangneung.

“According to our plan, the basic construction will be completed by next June,” said an official from the Transport Ministry. “From July, we will conduct test runs and inspections.”

Anticipating questions whether the project will be finished in time or whether the government has adequately budgeted for it, the official explained, “There is no delay at this point. What the public must know is that the new line under construction will be used even after the Games and the Olympics is just a motivation for us to accelerate the process and make sure it is done thoroughly. But even with the Olympics out of the picture, we had originally planned to construct the track.”

As for financing, another official from the ministry said, “We have allocated 304 billion won ($269 million) from next year’s budget for the construction of the new line. And for renovation, we’ve put aside 40 billion won. This plan is included in the government proposal and waiting for the approval of the National Assembly.”

But as accessible as Pyeongchang may become, the Olympics will be a grand failure without venues and housings ready to go before the opening.

In the coming Games, a total of 12 different venues will host seven different winter sports, six of which are newly constructed, in addition to the Olympic Stadium, which will be used for the opening and closing ceremonies.

Construction for these venues is on track, according to the PyeongChang Organizing Committee for the 2018 Olympic & Paralympic Winter Games (Pocog), with nearly 90 percent set to be done before next month’s test events. This is all well and good, but some experts are looking to the utility of these venues afterwards, given that over one trillion won is being dropped on their construction and renovation.

“Korea is spending an astronomical amount of money,” said Lee Yong-sik, a professor at the Department of Sports and Leisure Studies at Catholic Kwandong University in Korea and the author of an academic paper titled “Measures to maximize the post-utility of the venues of the 2018 PyeongChang Olympics.”

Lee adds, “The catch is, these venues are going to be used just once or twice during the Olympics, especially if they are not managed properly after the Games. But the post-management of these venues will require a tremendous amount of money, as well, which means we will have to use the venues somehow to generate a certain level of profit, at least enough to cover the cost of maintenance.”

Lee has therefore urged those in charge to consider using the venues in a variety of ways.

“It’s difficult for us to look to past host cities,” he explained. “But what we can do is maximize their usefulness by thinking outside the box. Think of Gangneung, for example. It’s a popular tourist destination during the summer. If you open up venues such as the Gangneung Ice Arena in the summer, visitors will come to escape the scorching sun. And this would raise people’s interest in winter sports, compelling them to visit even in winter.”

Lee also says Pyeongchang should be the designated location for annual domestic winter sports competitions and provide training facilities for athletes from around the world. “Facilities in Beijing won’t be ready for some time,” Lee said. “Given the proximity of Korea to Beijing, we can host several winter sports competitions and provide venues as training facilities.”

Lee’s concern over what to do with the venues once the Games end reflects a widely held view that avoiding the one-off pitfall is the sign of true Olympic success.

“Economists who study the Olympics,” The Washington Post notes, “point to Barcelona as a marquee example for how the Games can transform an ordinary place into a bustling, international destination.”

The host of the 1992 Games was a neglected coastal city used “as access to the sea.” But after the Games, “the city welcomed 7.9 million tourists in 2014, up from 1.7 million in 1990.” One of the venues, the iconic diving pool, is now a popular tourist attraction.

Similarly, officials will have to decide what to do about housing. Rio de Janeiro, for instance, faced criticism for selling off its housing units as luxury condominiums after removing favelas, the city’s shantytowns, and spending millions of dollars to renovate the area. Critics say the city should have used the Athletes Village to provide affordable housing for the underprivileged.

“We approached the issue from a different perspective by using the local housing market,” said one of the officials in charge of the Athletes Village and the Media Village in Gangneung. “Instead of building from scratch and not knowing what to do afterwards, we decided to cut construction expenses by renting apartments that are being built in the city, which the IOC thought was an inspired move.”

In Gangneung, the Korea Land & Housing Corporation, a government-owned company, is building apartment units close to the venues. After the Games, owners can move in, and meanwhile, the Olympic Committee of Korea will pay rent to the owners.

There are, however, more immediate concerns, especially those that affect locals in the region.

In January, an overpass bridge being built over the highway linking Seoul to Pyeongchang collapsed, prompting locals to question whether construction is being properly done.

Furthermore, just before the Chuseok holiday in mid-September, construction workers convened in front of the Gangwon Provincial Government office, demanding the payment of delayed wages. Yonhap News Agency reported on Sept. 13 that representatives from the Gangwon branch of Korea Construction Workers Union held a demonstration in front of the provincial office in Chuncheon, demanding that some 2,000 workers in 23 construction sites be paid their pending wages, which they say amounts to 15 billion won. “Most of these sites are related to the Olympics, directly or indirectly,” said a representative union, “and without solving this overdue-wage issue, the Olympics will not happen successfully. Meanwhile, overdue wages are still piling up.”

In addition, it has yet to be clarified how the organizers are coping with the resignation of Jung Ku-ho, a fashion designer and producer in charge of coordinating the stage at the opening and closing ceremonies. Jung stepped down after working for the Pocog for six months, reportedly unpaid, mainly due to the feud he had with Song Seung-hwan, the executive creative director of Olympic ceremonies for the 2018 Winter Games. It was reported that Song said he did not wish to instigate any more trouble by arguing with Jung.

But these challenges haven’t prevented some from already feeling the thrill of the Olympic spirit.

“This is my third time here,” said a 67-year-old woman visiting Alpensia Ski Jumping Centre, a venue for ski-jumping events also used as a tourist attraction during its off-season. “I can feel the energy of the coming Winter Games. It is a privilege to be able to visit the venues in advance. After the 1988 Summer Olympics, this is a great opportunity for our country.”