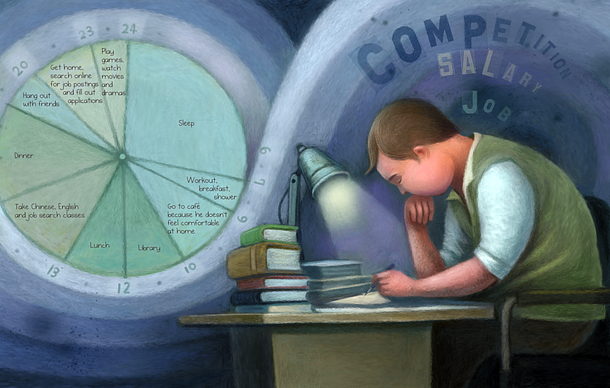 Mr. Yoon, 27, wakes up every morning at 7 a.m., slightly before his parents, and heads to a gym next to his apartment. After his workout he joins his family for breakfast - but rushes through it as fast as he can. Then he skedaddles out of the house with a backpack full of textbooks and a laptop.

“I try to avoid having conversations with my parents as much as I can,” Yoon says, “because it’s too hard answering my parents when they ask how my job search is going.”

It’s not going well at all.

Yoon graduated from a prestigious college in the United States and returned to Korea with high hopes full of getting a classy job. It has been two years and he’s still unemployed. His confidence of getting a job offer from a major company like Samsung or Hyundai has been eroded.

Yoon is being coached on how to get a job. He shells out nearly 3 million won ($2,626) per month to private educational institutions. They help him prep for interviews and - over and over again - improve his resume.

“I know such courses aren’t going to get me a job, but at least it gives me the consolation that I’m not the only one having a hard time finding one,” Yoon says. “And I can get to read the resumes of former students at the institutions who received job offers. They give me ideas about what Korean companies are looking for.” One idea he picked up: Chinese and English language classes, which he thinks will improve his resume.

Yoon, however, has not lowered his standards and applied at a small or mid-sized company. He continues to hope a big company will finally hire him during their official recruitment seasons, which come twice a year.

Korea’s millennials, aged between 15 and 35, now account for over a fourth of the nation’s entire population. But they were born under an unlucky star. The rapid growth of the 1970s and 1980s - when their grandparents were of working age - has ended. Even their parents’ struggles through the late 1990s foreign exchange crisis seem not so bad - because Korea’s economy came roaring back.

The millennials have hit the job market at the start of an era of low growth. And that means the toughest job competition in decades.

The Korean economy grew by nearly 5 percent annually from 2000 to 2010. It fell below the 3 percent level starting in 2012. The Bank of Korea recently shaved its 2017 growth forecast to 2.8 percent from 2.9 percent while holding this year’s outlook at 2.7 percent.

According to Statistics Korea data released last week, the youth unemployment rate for jobs seekers between the ages of 15 and 29 rose 1.5 percentage points from the previous year to hit 9.4 percent, a record for the month of September since 1999, which is when the statistics agency started to compile data in its current from.

The unemployment rate for people who earned bachelor’s degrees is rising steadily.

One out of three unemployed Koreans graduated from a four-year college, the statistics agency said. As of the third quarter of this year, a total of 315,000 people, or 32 percent of the 985,000 unemployed, hold bachelor’s degrees, surpassing the 300,000 level for the first time since 1999, which is when the government started to compile this data in its current form.

“My parents’ generation was told they could get a job automatically after they graduated from college, but that’s not how it is anymore,” said Kim, a 29-year-old unemployed man.

The figure was around 15.3 percent in 2005 and has grown continuously since. It surpassed the 20 percent level for the first time in 2008.

The unemployment rate for people with two- or four-year college degrees has grown to 44.5 percent of the total.

High youth unemployment has started a trend in Korea: staying in school. College seniors are postponing their graduations because they believe that a resume from a “degree candidate” gets more attention than from some who describes themselves as “unemployed.”

“I finished my courses last year but am still technically a student as I postponed my graduation,” a 27-year-old man surnamed Cho said. “All companies want us to fill out current employment status and I heard they don’t like unemployed people and question their abilities as they didn’t get a job after graduation.”

The term “fossil” is the new nickname relatively younger students have given to the eternal students.

The jobless numbers are even worse when you realize the government’s unemployment figure doesn’t include young Koreans who are willing to get a job but have not applied to any companies. They are not considered part of the economically active population.

Hyundai Research Institute argued in a report released earlier this year that the actual youth unemployment rate is near 34 percent if you include people preparing job applications and resumes.

To make things worse, 48.6 percent of Korea’s top 500 companies say they will hire fewer employees this year than last, according to a survey by the Federation of Korean Industries (FKI), one of the nation’s leading businesses lobbying group. The FKI cited ongoing corporate restructuring and the turgid global economy as main reasons for the cuts. “The employment market is expected to be tough,” it concluded.

Even when they get jobs, Korean millennials don’t show the kind of loyalty to an employer that previous generations did. Data shows that many young Korean workers in their 20s left their first job within a year, and more millennials feel that work is not something that they need to do for a living - especially if it does not help their pursuit of happiness in their lives.

Kim, 24, graduated from a college in Seoul earlier this year. For six months, she has worked at a mid-sized publishing company, but is considering quitting. She is having trouble getting used to the schedule and working environment.

“I work at least 12 hours a day, or from 8 in the morning to 8 at night, and don’t have much free time for myself,” Kim says. “Often I have to be at the office on weekends. I think I might have started working too soon after the graduation without taking enough time to seriously think about what I really want to do for the rest of my life.”

Kim said she appreciates the stable wage. Since freshman year of college, she has been financially independent from her parents, working part-time jobs at various places, such as cafes and jewelry shops, to pay for her tuition and student loans.

But a steady paycheck may not be enough for Kim.

“My bosses and senior colleagues tell me I’m not polite enough at work and that I have to be more polite to them. This just wasn’t the life that I looked forward to.”

According to the Korea Employers Federation (KEF), nearly one out of four newly employed workers left their jobs within a year and the figure was higher for those who worked at companies with fewer than 300 employees.

KEF surveyed 306 companies and said the rate of newly hired workers leaving their first job within a year was 27.7 percent this year, up 2.5 percentage points compared to 25.2 percent in 2014. This is 4.1 percentage points more than four years ago.

“One of the biggest reasons for them to leave was failure to get used to the work and the company,” said the KEF in a report released in June.

A total of 49.1 percent of those who left jobs said they weren’t able to adapt to the work and working environment, which is 1.5 percentage points higher than 47.6 percent recorded in 2014. Another 20 percent said they left because they were not satisfied with the salary and benefits, and 15.9 percent cited the location of the work and working conditions as main reason.

“Young Koreans are more individualistic compared to the previous generation and they tend to be not so strong in working with other people,” says Jin Joo-hwa, a researcher at LG Economic Research Institute. “They don’t want to do overtime and go to dinner with co-workers after work, saying they value their privacy. They are not used to the top-to-bottom type of working environment or just receiving orders from their bosses because they are used to communicating freely with others, as they are more familiar with communicating through social media.”