[At Home with Her Excellency, Turkmenistan] Sumptuous carpets define a Turkmen home

[At Home with Her Excellency, Turkmenistan] Sumptuous carpets define a Turkmen home 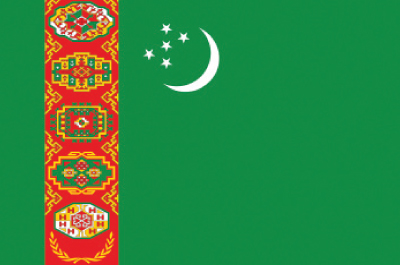 Not all ambassadors are satisfied with the low ceilings of Korean houses. When they seem far too low compared to what they had back home, many diplomats decide to remodel their houses. Living in one of the world’s most densely populated cities, air circulation naturally becomes a top priority.

But when Tazegul Mammetalyyeva, wife of the Turkmen ambassador, took her first step into a Korean house, it was none other than the ceiling that instantly made her fall in love.

Coming from a country where the ceilings are twice as high - over four meters (13 feet) - a low ceiling meant she and her husband no longer had to rely on a ladder or doorman to pull off the simplest domestic tasks.

“To change the lights, you’d have to risk your life!” she laughs. “Now we can get things done so easily at an arm’s reach.”

A. We arrived in Korea two and a half years ago with our two kids. In our first two years, we lived in a house in Itaewon-dong, central Seoul. We then had to move out in April when our host decided to sell it. We looked through many different styles of houses and ultimately chose to live in the fourth floor of a five-story villa in Hannam-dong, a neighboring area. There are three bedrooms, three bathrooms, a dining room, living room, kitchen and outdoor balcony. Our neighbors include the speaker of the National Assembly and the foreign affairs minister. The embassies of Myanmar, Bulgaria and Italy are also nearby.

Do you host any receptions here?

Aside from the lunch and dinners we’ve held for our Korean friends and colleagues in the diplomatic corps, I’ve also taken part in two projects at the Seoul International Women’s Association, in which the general public was invited for a rich experience of my home country. I was able to introduce Turkmenistan and treat them to a table of authentic Turkmen cuisine, which included samsa (a baked dish with beef and onion filling), pilaf (a dish of rice cooked in seasoned broth) and shashlik (a type of kebab).

I’m very fond of our Turkmen carpets. There are a total of six in our house. Carpets are the love and pride of all Turkmen people. It’s impossible to imagine any house in Turkmenistan without a carpet. What makes our carpets exceptional are their beauty and durability.

From left: Dolls wearing traditional attire; Objects highlighting Turkmen culture are exhibited in the couple’s living room, including carpets, best known for their beauty and durability. The couple has six carpets in the house.

What’s so special about Turkmen carpets?

The Turkmen carpet is a key part of our national culture. For centuries, they’ve remained unchanged, and are famous for the peculiarity of their amazing patterns as well as the rich combination of colors - which other nations don’t have. On them are Turkmenistan’s five traditional emblems that also make up the vertical strip on our national flag, which symbolizes the traditional values of our country.

Depending on size, each carpet can take several months or years to make, by a few or many women. Everything is handmade. No machinery. In Turkmenistan, it’s a tradition for mothers to teach their daughters how to make carpets. My mother was taught by my grandmother. Unfortunately, I never had the chance to learn from my mother, though, because I’ve always been far away with my husband. My mother handed down all her tools, so hopefully, I’ll be able to master the skill set one day.

How do Turkmen select a good carpet?

A novice would walk into the shop and look at the front side of a carpet. Professionals would flip it over and see how many knots there are. The more knots, the better quality the carpet is because it means it’s durable. The tightness of Turkmen carpets is another key quality, which goes to prove the hard effort of carpet makers. A square meter is tied by hundreds of knots.

What about the paintings here? Which is your favorite?

There’s an oil painting in our living room that features a bride in a traditional Turkmen wedding. Silver jewelry is draped all over her body, and she’s about to ride a camel across the desert to arrive at her new house, where the groom is. When my husband and I got married, I had 25 kilograms (55 pounds) of silver jewelry on me, and I had to endure all the weight for an entire day! When my daughter gets married, I’ll pass them on to her. 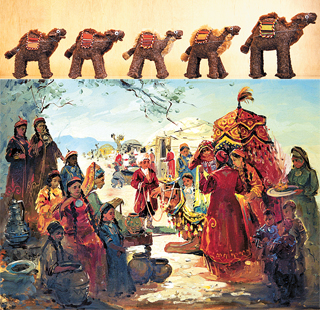 Top: Stuffed camel dolls are lined up on a shelf in the living room. Camels are used as the main mode of transportation in Turkmen deserts. Bottom: An oil painting that hangs next to the outdoor balcony depicts a scene from a traditional wedding, in which a bride prepares to ride a camel across the desert to reach her husband.

What are some key similarities and differences between a Turkmen and Korean house?

In our apartment back home, our ceiling is 4.2 meters high, way higher than Korea’s usual 2.3 meters. All modern Turkmen homes have high ceilings due to the dry, hot weather. When we first arrived in Korea and stepped inside an ordinary house, we were pleasantly surprised by how low the ceiling was. It seems so easy now to change our lights, because in our Korean house, my husband doesn’t have to climb up a ladder like he did before.

On the other hand, Turkmens are similar to Koreans in that we take off our shoes in the house. Traditionally, like Koreans, we didn’t have beds or tables in the house, so we slept and ate mainly on the floor, on which carpets were laid. Dirty shoes would have caused a lot of sanitary problems if we wore them inside.

In Turkmenistan, is there any cultural decorum a foreign visitor would have to be aware of?

The tablecloth is considered sacred, so to step on her would be considered a sin. It’s the same for bread and salt. Historically, Turkmens have long lived a nomadic lifestyle because over 70 percent of the land is occupied by deserts. This means food has always been a very crucial aspect in our life.

For some of our readers who are interested in visiting your country, do you have any personal suggestions on where to visit or what to eat?

Every visitor must drop by Kunya-Urgench, a city that contains the ruins of the Achaemenid Empire; Nisa, or the “Parthian Fortresses of Nisa,” one of the first capitals of the Parthian Empire; and the State Historical and Cultural Park “Ancient Merv,” one of the oldest and best-preserved oasis cities along the Silk Road in Central Asia, as well as the capital of the Seljuk Empire. All three places are listed on Unesco’s World Heritage List.

As for our national cuisine, chorek (a national bread) and samsa, both baked in a tamdyr (clay oven), is a must, as well as Turkmen melons, watermelons, figs, grapes and more. Spring and late summer are the perfect time to visit Turkmenistan.