‘Go back to your country?’

‘Go back to your country?’ 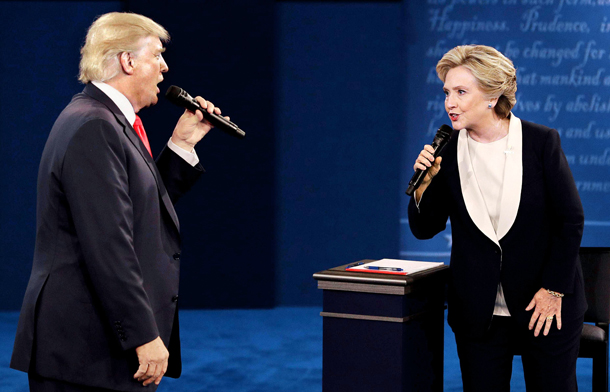 Around 4 p.m. on Sept. 27, an elderly white man approached me as I walked into Washington’s Foreign Press Center, where my office was located. He called me “sir” and asked for money. As I said “sorry” and entered the building, he shouted, “Go back to your country.” I couldn’t believe what I’d just heard and turned back, but he just walked away.

As I’ve followed the U.S. presidential election campaign, I’ve always wondered where all the Trump supporters were hiding. The mainstream has been desperately opposing Trump, and think tank experts sneer at his candidacy in private. An East Asian specialist I ran into in Virginia on Oct. 15 said that the Republican Party would have preferred to nominate Jeb Bush, and it would have been a tight race.

But opinion polls since July show that Trump’s national rating has never fallen below 35 percent, according to the Real Clear Politics survey. No matter what opinion leaders and the mainstream media say, Trump’s popularity hasn’t subsided. Despite allegations of sexual assaults and tax evasion, his supporters continue to back him. The Chicago Council on Global Affairs’ nationwide opinion poll released on Oct. 6 shows why Trump has such solid supporters. Anti-immigration sentiment in American society has reached a considerable level. Some 43 percent of the respondents in a poll said immigration was a serious threat. While only 27 percent of the Democrats responded so, 67 percent of the Republicans said they felt threatened by immigration. Eighty percent of Trump’s core supporters said that immigration was a serious threat. “Trump did not need to convince Republicans to be prioritize blocking illegal immigration — they already thought it was a major issue,” The Washington Post blogged. On globalization, Trump supporters had the most negative views. While 65 percent of the overall respondents felt positively about globalization, only 49 percent of core Trump voters did.

The Clinton camp still feels anxious over hidden Trump votes, but multiple polls show Clinton is dominating since the first television debate. In the three televised presidential debates, Trump missed the chances to revamp his image from “hot-tempered” to “trustworthy.” However, even when Trump loses, the discord between Trump supporters and those who oppose bigotry won’t be resolved. As Trump supporters decline, the remaining will unite more tightly and their ideas may get more extreme. This is the homework for America.


*The author is the Washington correspondent for the JoongAng Ilbo.