If you’re a start-up seeking investment, the traditional route would take you to a dedicated venture capital firm or angel investor. But these days, there’s another option that is becoming increasingly popular: corporate venture capital, where established companies directly invest in start-ups in return for equity.

More conglomerates in various sectors from technology to manufacturing are creating entities to scope out and fund burgeoning start-ups. Google Ventures, one of the biggest corporate venture investors in the tech business, is one example. Now known as GV, the investment arm of Alphabet provides funding to start-ups using Google’s capital.

It’s a symbiotic relationship akin to that of a crocodile and Egyptian plover, which cleans its teeth. The crocodile, with its power and experience, protects the small bird and provides nutrients on which it can grow, while the bird cleans parts of the crocodile’s mouth that it cannot reach on its own. 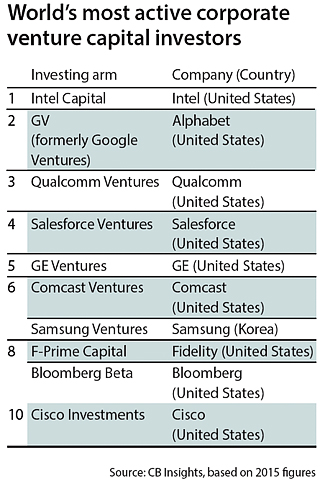 Although the current economy is dominated by big, established companies with long histories, the global market is changing at an unprecedented rate. The rise of information technology is forcing businesses to either catch up or get left behind, and industry giants now constantly have their ears to the ground for newbies whose goals might be in alignment with their own.

The idea of corporate venture capital has been around for quite some time in the United States. The most active investment is made by IT companies like Intel Capital and GV, which is famous for putting money into now well-known names like Facebook, Uber and Airbnb in their adolescent stages. Health care giants like Novartis, GlaxoSmithKline and Johnson & Johnson have also long had corporate venture capital arms.

According to venture capital and angel investment database CB Insights, the most active investor last year was Intel Capital, followed by GV, which took the lead the previous year. Korea’s Samsung Ventures came in sixth along with the United States’ Comcast Ventures. Among the top 20 corporate venture investors, 12 were American, and many of the investment choices were in technology and health care.

The investments don’t always turn out to be successful, but when they do, the gains are very rewarding, with high returns from equity and an opportunity to enhance competitiveness through fresh ideas.

By the end of the month, the campus also hopes to host events with three of the biggest Korean e-commerce companies: Shinsegae I&C, GS Home Shopping and SK Planet.

“Major companies in Korea have recently begun their search for opportunities to work with start-ups, seeking change and innovation through the cooperation,” said Cho Yun-min, program manager and organizer of Campus X Industry. “Conglomerates are looking for a chance to develop their own structures through the newborn companies, and start-ups yearn for a partnership with the big hands of industry. I thought it would benefit our own firm by connecting the two parties and expanding investment opportunities.”

Korean conglomerates are also taking more direct routes, investing and nurturing start-ups under their own venture capital projects. Hanwha S&C, the IT affiliate of Hanwha Group, established its DreamPlus accelerator program in 2014 and has since invested some 10 trillion won ($8.81 billion) in 25 start-ups.

“We realized that the cost for starting a new business and waiting for it to grow, if it does, that is, is much higher than a merger and acquisition of a fast-growing business, and so we started DreamPlus to look for such new businesses,” said Hong Kyung-pyo, head of DreamPlus.

Hanwha has shown particular interest in financial technology and moving banking services normally done at the counter to online. The company recently opened a fintech center in Yeouido, western Seoul, and according to a start-up trends report by Start-up Alliance and Open Survey, Hanwha S&C was voted the most popular company by start-ups for soliciting early-stage investment. Other top choices included venture capital firms founded by star entrepreneurs.

Naver and Kakao, two of the country’s top tech companies, are also following the drumbeat of their American counterparts in funding start-ups.

Last May, Naver opened a workspace for start-ups similar to Google’s campus called D2 Startup Factory in Gangnam District. Kakao, through its K Venture Group, is also searching for and investing in start-ups with innovative ideas to fuel its own future growth.

Corporate venture capital in Korea is spreading to other unexpected sectors like retail. Lotte Accelerator, established in February, has opened a start-up support center, also in Gangnam District. Unlike other venture investors, Lotte Accelerator’s goal is to find talent that can enhance their main businesses in retail.

Platform provider SK Planet has been making investments through its accelerator program 101 Startup Korea, and GS Home Shopping’s corporate venture efforts since 2010 have been called an exemplary example of cooperation between a conglomerate and start-up, especially with its acquisition of product design start-up 29CM.

In the pharmaceutical sector, Hanmi Pharmaceutical established Hanmi Ventures in July with the aim of speeding up research and development of new medicine by investing in bio ventures both inside and outside the country. This investment model is believed to decrease the risk involved in developing new medicine.

“Helping a start-up grow by using the mother company’s networks and assets is a win-win situation for both [companies],” said Hong of Hanwha’s DreamPlus accelerator.