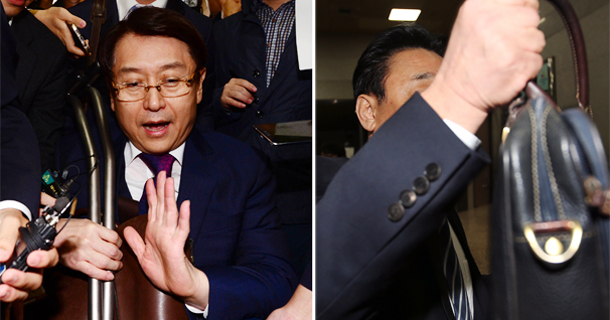 The prosecution’s investigation into a scandal involving President Park Geun-hye’s longtime friend has picked up speed as key witnesses involved in the creation of two suspicious nonprofit foundations submitted to questioning on Sunday.

The Seoul Central District Prosecutors’ Office has been investigating accusations that Choi Soon-sil, a daughter of Park’s former mentor, Choi Tae-min, used her connection to the president to strong-arm conglomerates to make massive contributions to launch two nonprofit foundations. Suspicions grew that some of the foundations’ funds were funneled into shell companies established by Choi and her daughter in Germany.

Although the probe progressed rather slowly at first, prosecutors began acting more aggressively over the past few days after Park gave them the green light. “If anyone committed illegal acts concerning the foundations,” Park said on Thursday, “including misappropriation of funds, stern punishments will be handed down.”

Kim Hyung-soo, communications professor at Yonsei University and the founding chairman of the Mi-R Foundation, was questioned by the prosecution on Sunday about the scandal surrounding the foundation. He served the post until September. Kim was allegedly appointed to the post based on the recommendation of Cha Eun-taek, a visual artist who earned the nickname “Crown Prince” due to his rapid success during the Park administration. He reportedly has a close relationship with Choi and worked as the visual director for the 2014 Incheon Asian Games.

Cha was also suspected of being involved in the Mi-R Foundation’s creation and operation.

“I did nothing to be ashamed of before my students,” Kim said as he was questioned by reporters about Choi before entering the prosecution. Prosecutors said they planned to question Kim about his relationships with Choi and Cha as well as the foundation itself. He will also be asked whether Choi or Cha influenced the personnel appointments or operations of the foundation.

Another key witness, Kim Pil-seung, a director of the K-Sports Foundation, also appeared at the prosecution on Sunday. Kim, a professor of police science at Daejeon University, allegedly led the creation and operation of the foundation. Asked about his relationship with Choi and other accusations involving her, Kim said, “I don’t know. I have nothing to say.”

On Saturday, the prosecution summoned two officials of the Federation of Korean Industries (FKI) and an official of the Ministry of Culture, Sports and Tourism about the two foundations’ fund-raising activities. The prosecutors questioned the ministry official about the foundations’ conspicuously swift establishment, since both were approved by the ministry only one day after submitting applications.

Other foundation officials, including K-Sports Foundation’s first chairman, Chung Dong-koo, were also questioned on Friday. The whereabouts of Choi, however, remain unclear. The prosecution confirmed that Choi and her daughter, Chung Yoo-ra, left for Germany and it will try to locate them and request their return to Korea for questioning.

The JoongAng Ilbo and JoongAng Sunday confirmed that Choi purchased two houses and an 11-room hotel in Germany, but it was unclear if she is still staying in the country. Cha is not in Korea, either, and sources said he recently left for China.

On Thursday, the prosecution also obtained court warrants to look into the call logs and text records of Choi and other foundation officials.

A civic group, Spec Watch Korea, filed a petition to the prosecution to investigate Choi and An Chong-bum, presidential senior secretary for policy coordination, on charges of forcing conglomerates to make massive contributions to the foundations. The civic group also urged the prosecution to investigate Chairman Huh Chang-soo of the FKI and its vice chairman, as well as chairmen and CEOs of the 62 conglomerates that made donations to the foundations, claiming that the tycoons and the FKI, the country’s largest business lobby, bribed President Park through the foundations to curry favor regarding economic bills, including the labor market reform measures. The group said the entire fund-raising process should be treated as one massive bribery scheme.

The prosecution said the people questioned until Sunday were all witnesses, not suspects. The prosecution also has no substantial grounds to seek search and seizure warrants, a prosecution source told the JoongAng Ilbo. As the scandal snowballs, opposition parties and some members of the ruling Saenuri Party said an independent counsel investigation is necessary in order to investigate the allegations with integrity.