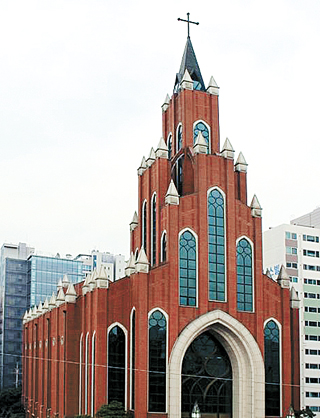 On Oct. 16, dozens of couples waited for hours in front of Yakhyun Catholic Church, a 19th century red-brick Gothic building that sits atop a promontory known as “Prayer Hill” in Jung District, central Seoul. A pathway made of 14 hand-laid stones leads from the road to the large wooden doors of the church where the 140 couples awaited the results of a lottery that would determine who gets to hold their wedding at local cathedrals such as this one, Myeongdong Cathedral in Jung District and Yeoksam-dong Catholic Church in Gangnam District, southern Seoul, next year.

Cathedral weddings have become so popular lately that some couples wait years to secure a place at one of their famed altars. The first to receive a number at Yakhyun church that day was Kwon Koo-hyun, who arrived at around 9 in the morning, six hours before the draw began.

“I go to church in Songpa District [southeastern Seoul],” said Kwon, “but I really want to have my wedding ceremony here because it’s known to be such a beautiful place.”

Kwon picked number 101 and his girlfriend, Hong Ye-seul, looked at him and sighed. Exchanges of joy and sorrow continued as couples went through the same motions one by one. The church holds wedding ceremonies on Fridays and Saturdays, the most popular of which are from March to May, and couples need to draw a number smaller than 50 in order to be wed during more competitive times of the year.

Myeongdong Cathedral saw a total of 250 couples as it held a lottery drawing on Sept. 5, which gave 155 couples fixed wedding dates. Oksu-dong Catholic Church in Seongdong District, eastern Seoul, also made reservations for its 2017 wedding ceremonies this fall.

But getting a reservation is only the first step in a long path toward having a cathedral wedding. The bride and groom must also be Catholic and are required to learn Catholic marital doctrine, followed by a face-to-face talk with a priest. Despite these hurdles, Yakhyun Catholic Church saw a 15 percent increase in its lottery participants over last year, according to its administration chief, Han Myung-sook. One reason for this, other than aesthetic appeal, is the cost of a cathedral ceremony as compared to one held at a wedding hall or hotel.

“My wedding ceremony was at one of the most popular cathedrals in Seoul,” said a newly wedded groom, who was married on Sept. 8 at Myeongdong Cathedral, “but it only cost us four million won [$3,519] plus 30,000 won for food per person.”

Not taking into account other events such as pyebaek, during which the newlyweds bow deeply before their parents, the total cost of wedding ceremonies at cathedrals amounts to an average of 5 million won. According to one couple, to be wedded at Yakhyun Catholic Church in May, “We want to have our wedding ceremony at a quiet and solemn place, different from the one-size-fits-all wedding ceremonies that are so common these days.”

Some couples even enjoy the complex procedure involved in wedding at a cathedral. Jeon Young-jin and Ham Soo-jin, who are promised to be wed at a cathedral in two years, said, “We feel like we’re exchanging vows just by preparing for such difficult requirements.”

But some Catholics express concern that churches may lose their original function as religious centers. In response to such concerns, Myeongdong Cathedral will increase the required dedication fee from 1.2 million won to 3.2 million won starting from next year. In addition, it also announced it will hold fewer wedding ceremonies.

“We’re taking measures to prevent churches from becoming little more than popular wedding sites,” said an official from Myeongdong Cathedral, “but even so, some people are still more attracted to being married at cathedrals.”