KBL starts off season with a bang

KBL starts off season with a bang 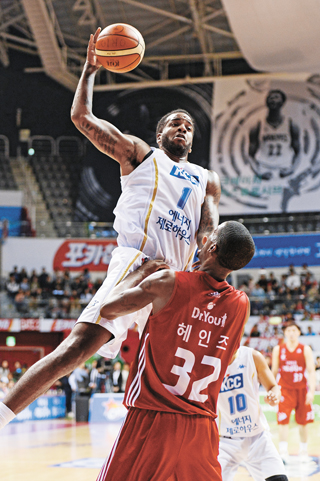 The 2016-17 Korean Basketball League (KBL) season officially started over the weekend, marked with a matchup between Goyang Orion Orions and Jeonju KCC Egis in a rematch of last season’s KBL Championship series. As intense as the hype for this year has been, including the debut of “Super Rookie Trio” - Lee Jong-hyun, Choi Jun-yong and Kang Sang-jae - the first weekend of the KBL season was as climactic as they come, with some teams starting the season on an auspicious note while others kicked off their five-month campaign with irreparable losses.

Far and away, the highlight of the weekend was Yang Dong-geun’s injury, as he is the veteran and pillar both on and off the court for the Ulsan Mobis Phoebus.

Phoebus and their head coach, Yoo Jae-hak, began this season with high hopes. With Lee Jong-hyun, already a rookie-of-the-year candidate, joining the squad and with Yang, a four-time league MVP, still at his prime, the Phoebus quickly rose to the surface as favorites to take home the KBL trophy. Over the past 10 seasons, Phoebus has clinched six championship titles, including the three from 2012 to 2015, but they lost their shot at the fourth straight title in 2015-16 season when they were eliminated in the semis.

Although two of the trio made their debut over the weekend, Lee was sidelined as he is still in the process of recuperation from a foot injury.

With Lee watching from the bench during Saturday’s match against the Incheon ET Land Elephants, Yang sprained his left wrist in the third quarter. Diagnosed with a fractured wrist, the Phoebus captain will be on a surgical bed today and off-court for at least three months. 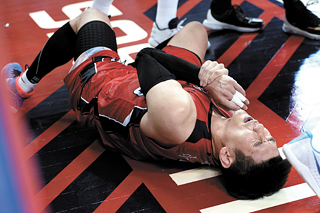 Yang Dong-geun, point guard and captain of the Ulsan Mobis Phoebus, is in pain after suffering an injury to his wrist on Saturday. [KOREAN BASKETBALL LEAGUE]

Yang’s presence on the court has been the main impetus behind Phoebus’ success in the past decade. As a point guard and a veteran, he oversaw how the games were run on the court. Phoebus’ attack and defense all started and ended at the tip of Yang’s fingers.

After suffering a 63-80 loss against the Elephants on Saturday, Phoebus had to endure another heartbreaking defeat on Sunday, a clear sign that Yang’s absence has hurt the team. Although Ham Ji-hoon tried to fill in that void by piling in 21 points, his effort wasn’t nearly enough to salvage the team’s devastated morale. Phoebus went into a two-game skid, losing 73-88 to the Seoul Samsung Thunders.

“There go all my plans for the early season,” said Yoo, who seemed fazed by the unexpected turn of events.

While Yoo was having possibly the worst opening weekend, the Orions and their head coach, Choo Il-seung, seemed unable to control their satisfaction, especially about their new import, O’Darien Bassett.

One of the biggest challenges facing the Orions after last season was filling up the gap left by Joe Jackson. Jackson gained favor from his head coach as well as the fans last season with his gravity-defying dunks as well as dribbling skills. But after his departure, it became evident that finding a replacement to match Jackson’s skills would be a daunting task.

But then came Bassett.

During the match on Saturday against the Egis, Bassett played for 26 minutes and put 18 points on the board, leading the team to take a 91-69 win over their rivals from last season.

The American’s dribbling skills and ability to penetrate inside the court, as well as sharp eyes for spotting teammates and dishing out assists and solid mid-range jumpers were all more than enough to make Choo forget about the void left by Jackson. “He did better than I expected,” said Choo.