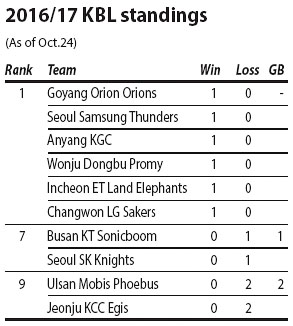 Basketball league revs up with a long, uncertain road ahead

The Korean Basketball League (KBL) season officially kicked off over the weekend and the key theme for this season will be the league’s level playing field, according to the head coaches and players.

With significant variables such as the debut of the Big-3, the rookie trio Lee Jong-hyun of Ulsan Mobis Phoebus, Choi Jun-yong of Seoul SK Knights and Kang Sang-jae of Incheon ET Land Elephants, as well as new imports joining the league, the dynamics of the league are as unpredictable as ever.

During the pre-season press conference, the head coaches of the teams agreed that instead of arguing who will make it to the championship, they should first try to figure out who will be qualifying for the playoffs. While many key players of top teams from last year remained put, teams like the Elephants saw a drastic revamp of their roster during the off-season. They traded off Han Hee-won for Park Chan-hee, a guard, who played for Anyang KGC for the past five seasons. Park received the highest rating from Saturday’s win over Ulsan Mobis Phoebus. 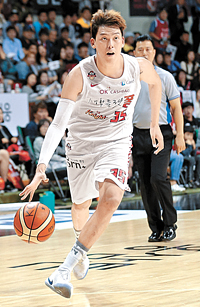 The 2016-17 KBL season marks the debut of the “Super Rookie Trio,” Lee Jong-hyun and Kang Sang-jae out of Korea University and Choi Jun-yong of Yonsei University.

During the rookie draft last week, which was considered the best the league has seen in recent years, Lee donned the Phoebus uniform and his old college teammate Kang wore the Elephants’ jersey.

Choi, the only player from the trio out of Yonsei University, was picked by head coach Moon Kyung-eun, a Yonsei man himself, of the Seoul SK Knights.

And while Lee of the Phoebus sat on the sidelines and watched, as he is still yet to recover from an injury, Kang and Choi each made their professional debut during the first match of their respective teams.

The two did not have much time to adjust to the new setting but this did not hinder them from showing off what they are made of on the court. Kang stepped on the court as a substitute, scoring five points while grabbing four rebounds and tallying three assists. But Choi’s debut was the grand spectacle as he appeared in the the game as a starting forward.

Against Anyang KGC on Saturday, Choi started and played over 29 minutes, putting up 12 points on the board for his new team. He also grabbed nine rebounds, second among his teammates, and dished out two assists.