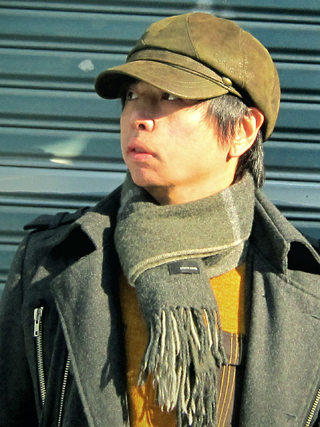 Yun Jae-ho, better known abroad as Jero Yun, is a South Korean filmmaker whose interest lies in the lives of people on the margins who can’t return to the country they were born in. His latest documentary, “Madame B: A North Korean Woman,” focuses on the life of a defector and was screened at the sixth North Korean Human Rights International Film Festival, which wrapped up on Sunday. [HOLY GARDEN]

South Korean filmmaker Yun Jae-ho is not as well known at home as he is abroad, where many of his pieces have screened at international film festivals under his French name Jero Yun.

Perhaps it is this sense of distance from home that threads together his body of work. Born in Busan and educated in France, the acclaimed director has long been curious about the lives of people on the margins who can’t go back to the country they were born in due to political and social reasons. His interest in the subject stemmed from a chance encounter he had with a Korean woman born in China who now runs a bed and breakfast in Paris.

The meeting led him in 2010 to create a 13-minute documentary called “Promise” based on the woman’s story. His interest soon expanded to North Korean defectors and resulted in the release of a new documentary, “Madame B: A North Korean Woman.”

The 72-minute documentary, which was well received at festivals in Cannes, Moscow and Zurich, was most recently part of the opening day of the sixth North Korean Human Rights International Film Festival, which wrapped up at Daehan Cinema in central Seoul on Sunday.

“Madame B” centers on the life of a North Korean woman who escaped the despotic country for China to earn money. Leaving behind two sons and a husband, the 37-year-old promises to return after a year only to end up being sold to a farming family as a bride for their single son.

Although the woman reconciles with her new life in China, her lack of proper identification means she can’t land a stable job, forcing her to engage in illegal activities like drug trafficking.

After years of separation from her North Korean husband and sons, the woman helps them defect to South Korea and then embarks on an arduous journey through Laos and Thailand to meet them in the “free South.”

Her intention, though, is to earn South Korean citizenship in order to return to China and officially marry her Chinese husband, for whom she is grateful for having taken care of her. But her plans are halted by investigative authorities in South Korea who suspect her of being a spy and smuggler.

In an interview with the Korea JoongAng Daily, Yun discussed the heart-rendering tale of “Madame B” and her endless search for home. Below are edited excerpts from the interview. 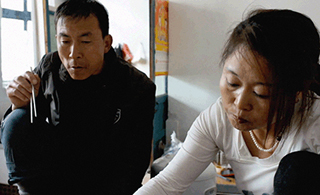 After being sold to a farming family as a bride for their single son in China, Madame B, right, has been living with her Chinese husband, whom she thanks for taking care of her.[HOLY GARDEN]

Q. What inspired you to make “Madame B”?

A. I was working on a script for a full-length movie in 2012. The following year, I headed to China to collect related information to help complete the script.

It was there that I met Madame B, who was working as a broker connecting North Korean defectors who crossed over to China. One day, she introduced me to her Chinese family and told me she wanted to show me her life. That’s how the documentary began.

Why Madame B instead of other female North Korean defectors?

I’ve met many different female North Korean defectors over the last six years, but Madame B’s life was very special in that she has been endlessly agonizing over which family to live with. After following the woman for three years, this woman who can never find happiness in any land, I felt the fallacies of a divided country and the bitterness it makes people feel.

What was most painful about shooting the documentary?

I felt the most pain when crossing from China to Laos and Thailand with a group of North Korean defectors. There were times I almost got killed, and I felt physically exhausted after hurting my leg.

After reaching Bangkok, I was arrested as an illegal immigrant for not having an entry stamp on my passport, which almost got me stuck in Thailand forever. I thought I would have to live there forever, and that made me feel utterly devastated.

Fortunately, though, I was able to avoid prison and was deported after paying a fine.

How are the North Korean defectors you traveled with doing?

They are all currently living in South Korea, including Madame B.

The film “Madame B” was invited to various international film festivals. How was it perceived? And will the documentary soon be heading to theaters?

It was very well received at international film festivals. It was screened in 15 festivals, including Cannes, Moscow and Zurich, and tickets were sold out most of the time. Through the experience, I learned that many people are showing interest in “Madame B.”

The documentary will officially screen at theaters in France in February, which is pretty amazing since it will be the first time a Korean documentary is playing in French theaters. It is also scheduled for release in Japan in the spring and will also likely be screened in Switzerland.

While “Madame B” is little dark in its story, “Hitchhiker” is a bright and heart-warming movie.