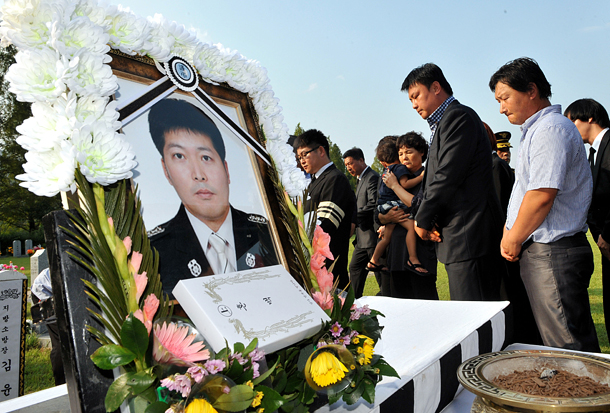 Four-year-old Jung Wu-jin is waiting for his father to return from a business trip. But the little boy’s father is never coming back.

Mr. Jung suffered a stroke on Sept. 24 and died from a cerebral hemorrhage on Oct. 17. He was 41 years old, gone much too soon.

The surviving family believes he died from overwork. Mr. Jung was employed at a state research institute focused on history. After he moved departments, he began to receive an excessive workload and routinely worked extra hours. He was frequently tired and wanted a day off but decided to report to work anyway. On Sept. 24, he suffered a stroke at home.

After the funeral on Oct. 19, I talked to his wife over the phone. “He complained about a migraine for several weeks, and one day, he suddenly lost consciousness,” she said. “We couldn’t even say goodbye.”

“He was quiet and extremely diligent,” Mr. Jung’s co-worker said. “He was a young and promising scholar. It is heartbreaking to see his son waiting for his father.”

Mr. Jung is not the only victim of a stroke from overwork and stress. According to an OECD report published in August, the average employee in Korea works 2,113 hours a year, the second longest among member countries. Koreans work about 800 more hours than Germans, who have the lowest number of work hours at 1,371. In terms of legal daily work hours, that difference is equivalent to 100 more workdays a year. It is only natural, then, that Koreans are at risk of dying from overwork. Working excessively long hours is considered a sign of diligence, and society encourages workers to work extra hours.

Dying from overwork is a widespread phenomenon in Japan, but even the Japanese work far less than Koreans, an average of 1,719 hours a year. The idea of dying from overwork comes from Japan, and “karoshi,” meaning “death from overwork,” is listed in the Oxford English Dictionary. But Japan at least has begun to actively address the problem. Last year, the country passed a law on the prevention of deaths associated with overwork, and earlier this year, the government surveyed 10,000 companies and published a white paper on the phenomenon.

What about Korea? There are no clear standards on death related to overwork, and rulings on such cases have not been consistent. Mr. Jung’s family is anxious as they prepare to fight their case as a work-related death.

But politicians right now are more interested in a controversial memoir by a former foreign affairs minister than this dire issue. Would it be too much to ask of our politicians to prevent sad cases like that of Mr. Jung and his family from happening again?


*The author is a political news reporter for the JoongAng Ilbo.