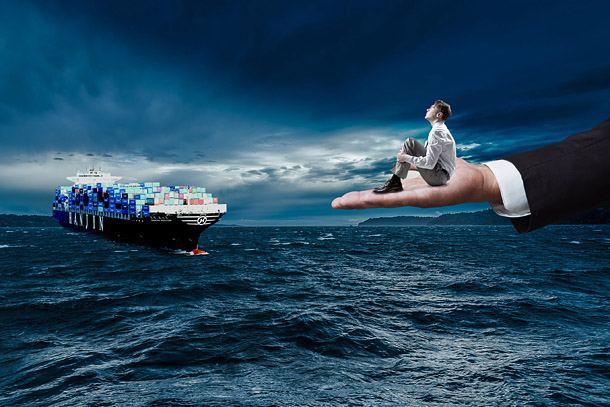 For the past five years, Chang Sung-hwan, a 25-year employee of Hanjin Shipping, has seen his wages frozen and his employment benefits cut, a precursor to the impending downfall that awaited the nation’s once-top-performing container shipping line.

“The company had been such a nice workplace, and I had ample earnings to give my children good support,” says Chang, a 48-year-old husband and father of two, while sighing. “But that’s all in the past now.”

Ever since Hanjin Shipping ran into financial troubles, no regular promotions have been given out, and most recently on Thursday, the company decided to cut financial aid for tuition granted to employees’ children and even cut supplemental insurance.

“We are fine with these inconveniences,” Chang says. “What keeps me awake the whole night is how I will support my family after the company completely falls apart.”

Moon Kwon-do, a 37-year-old captain on the Hanjin Rome, the first ship seized from the company, has similar concerns. On Aug. 30, his vessel was impounded at a Singaporean port by the shipowner demanding overdue charter fees.

Moon managed to get another captain to cover for him and return home, but the rest of the crew has been forced to stay behind because no one is willing to pay to process the cargo. Maritime law states that a certain amount of crew needs to work onboard a ship until it is fully unloaded.

“There is of course physical discomfort due to limited food, water and oil as well as limited capacity to store waste on the ship,” Moon says. “But even bigger is the mental stress about the uncertain future that lies ahead after they come back home.”

“The crew says they are willing to work for six months to even a year without wages if Hanjin Shipping can resume operations [and not liquidate],” Moon says. 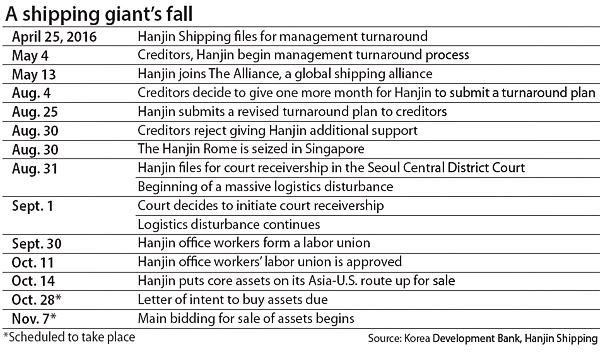 The sinking of Hanjin Shipping, once the nation’s largest and world’s seventh-largest shipping line, has caused a massive logistics disturbance, with distributors around the world waiting anxiously for cargo containing holiday inventory that has been stuck at ports or stranded at sea for months.

The fiasco has yet to be fully resolved, but the company is making progress. As of Monday, 80 out of 97 Hanjin container ships have completed unloading. Seven of the remaining ships are on their way home to Busan New Port, and 10 others are remaining in ports overseas for cargo processing. During the first week of the crisis, about 120 complaints were made to the Korea International Trade Association, but that number has declined now to about zero or one case a day.

The logistics mess, though, is just the tip of the iceberg. As the storm subsides, a substantial number of workers in the shipping sector are about to lose their jobs as Hanjin Shipping has begun steps toward full liquidation.

The Seoul Central District Court, in charge of Hanjin Shipping’s holdings, put the company’s core assets, including operations on its Asia-U.S. route, up for sale on Oct. 14. The route once reaped 3 to 4 trillion won ($2.65 to $3.54 billion) in annual revenue for the company, and Hanjin Shipping used to account for roughly 7 percent of the route’s business, ranking sixth among global players until the first half of the year.

Letting go of the asset means giving up its key business, and that would mean Hanjin Shipping is less likely to resume business under its own name.

Following the sale announcement, the company’s management delivered a notice last Tuesday saying it would cut more than half of its white-collar workforce, leaving only 300 necessary staff members to pursue sales.

The labor union is worried about the cuts, as the downsizing has already been severe. At the end of 2015, there were as many as 736 office workers, according to the company. That number is now down to 650, its labor union says, and they perform all sorts of work, from management and operations to sales.

Workers at branch offices overseas have been some of the first to go. Hanjin Shipping offices in China have already cut 30 percent of their workforce and plan to lay off most of their operating staff, including local Chinese workers, by the end of the month. 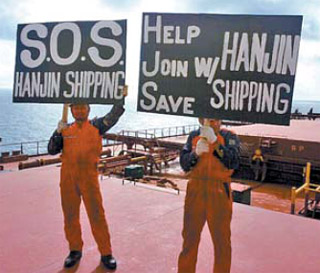 Two sailors aboard the Hanjin Rizhao hold up signs asking for support to save the ailing Hanjin Shipping on Oct. 3. As of Monday, 80 container ships, including the Hanjin Rizhao, have completed unloading while 17 are still at sea, according to the company. [MOON KWON-DO]

There are also questions about what to do with Hanjin Shipping’s 728 sailors. The Ministry of Oceans and Fisheries, the Korea Shipowners’ Association and Hanjin’s sailors union have established a task force to discuss the issue.

“They are a fine workforce, really, especially the sailors because they are mostly top graduates from Korea’s maritime universities,” says Kim Young-moo, executive vice chairman of the Korea Shipowners’ Association. “Korean shipowners have gathered once to talk about the issue on how we can absorb the quality talent.”

Still, it won’t be easy to take in 100 percent of Hanjin’s workforce at once. The association represents roughly 188 shipowning companies in the country, not nearly enough to give everyone a job.

“The best way at this point would be successful acquisition of the assets that Hanjin put up for sale and creating a new company that can afford to take on the workforce and established systems,” says Kim In-hyeon, a professor at Korea University Law School who has also served as a ship captain in the industry.

“Whether smaller national companies form a consortium or Hyundai Merchant Marine takes it, they’d be better acquisition candidates for Korean rather than foreign companies.”

Possible candidates for a consortium include three midsize shipping lines operating on Pacific Ocean routes: Korea Marine Transport, Sinokor Merchant Marine and Hayne Shipping. Although all parties are reportedly reviewing buyouts, the chances of a consortium or even Hyundai Merchant Marine actually going through with the deals are slim.

“People need to look at Hanjin from a different point of view,” Professor Kim of Korea University says. “The shipping sector should be considered a public business considering the impact it might have on the Korean economy. [The government] shouldn’t let all the accumulated know-how, human resources and top-notch logistics systems slip away as the shipper goes bankrupt.”

Indeed, Hanjin Shipping’s fall affects more than just the workers under its employ. The Korea Shipowners’ Association estimates over 2,300 jobs will be reduced across the shipping industry, including jobs at the Busan port. The Korea Maritime Institute projects an even tougher figure of 12,000 lost jobs across Busan and South Gyeongsang, the home base of Korea’s shipping industry.

“Hanjin used to be the dream company for aspiring talent at maritime universities and those eyeing jobs in the shipping sector,” says Hwang Jin-hoi, director of maritime industry research at the Korea Maritime Institute. “But now, as the shipper has fallen, maritime university graduates have lost a good destination to look forward to as well.”