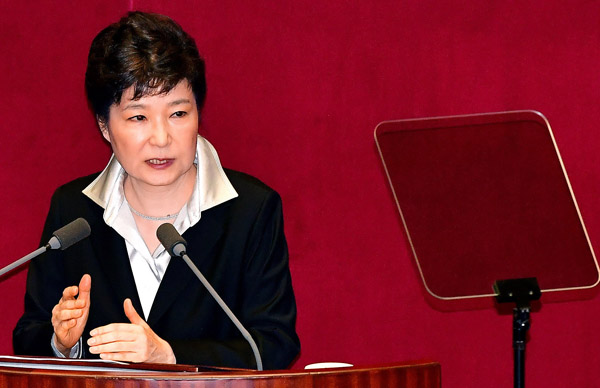 President Park Geun-hye on Monday proposed a constitutional amendment to replace the current five-year, single-term presidency, an abrupt 180-degree change in her position — and a possible attempt to divert attention from a scandal surrounding a longtime friend.
“As I look back on my three years and eight months in office, I felt deeply that a few changes of policies and reform initiatives are not enough to fundamentally resolve the problems we are facing right now,” Park said in a speech at the National Assembly.

She said a constitutional amendment is needed to overcome the economic and security challenges facing Korea.

Admitting that the current five-year, single-term presidency leads to major policies being altered or discontinued — making a consistent foreign policy nearly impossible — Park said it is imperative for the National Assembly to introduce a new governing system by revising the constitution.

Park said she has discouraged discussion of a constitutional amendment in the past because she wanted to concentrate all her efforts on the country’s security and economic challenges. “But I have thought deeply and reached the conclusion that the discussion cannot be delayed any further,” she said.

Park defended the timing of her abrupt proposal by saying now is the best time to amend the constitution. She said most lawmakers support the need to change the constitution and about 70 percent of the public wants such a change.

She made clear that the amendment will be made under her initiative. “Starting from today, I will accept the demands of the public and National Assembly for a constitutional amendment as a state project and start preparations to make the change,” she said. “In order to amend the constitution before my term ends, I will create an organization inside the government and draft a bill.”

She urged the National Assembly to create a special committee to amend the constitution and decide on the scope of the change.

Park included constitutional change as an election pledge during the 2012 campaign, but since taking office has repeatedly stressed that the timing is not right because there were more urgent challenges including the economy and North Korea’s nuclear program.

“We cannot be sucked into a black hole,” she said at a press conference in January, “and I cannot even dare to mention the constitutional amendment because we cannot see beyond our nose right now.”

When her loyalists in the ruling Saenuri Party started discussing the need for a constitutional amendment earlier this month, the Blue House again shot the idea down. As recently as Oct. 12, presidential spokesman Jung Youn-kuk said the president’s position remained unchanged.

Her position abruptly changed as a need for a political breakthrough arose over recent weeks. Due to a snowballing influence-peddling and corruption scandal involving her longtime friend Choi Soon-sil, her approval rating plummeted to its lowest-ever level of 25 percent.