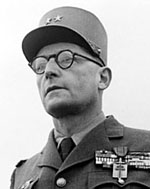 A publication ceremony for a book featuring photos of the legendary French Gen. Ralph Monclar will be held at 2 p.m. today at the Soorim Arts Center in Dongdaemun District, central Seoul, by the Foundation for the Remembrance of the Chipyong-ni Battle (FRCB).

Raul Charles Magrin-Vernerey, who later adopted the name Ralph Monclar, was a French soldier with over 30 years of service in the armed forces.

In order to lead his soldiers in the 1950-53 Korean War, the general famously reduced his rank from that of a three-star general to lieutenant colonel to avoid a disruption in the chain of command.

The book features some 30 photos of Monclar and his personal items as well as stories on the bravery of the French battalion Monclar had commanded at the height of the war.

FRCB was founded by veteran lawyer Kim Soung-soo, 73, in 2009 to promote a campaign to raise public awareness of the contribution made by Gen. Monclar during the war.