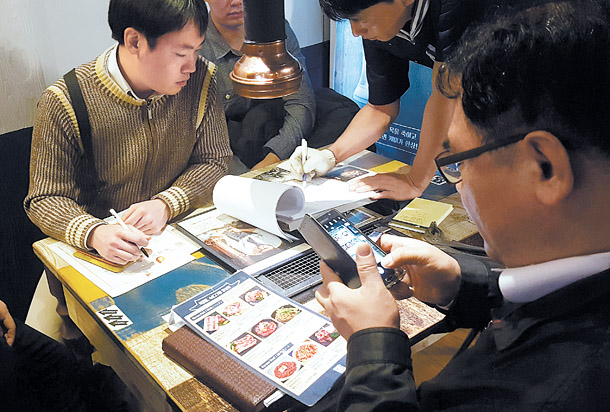 Kim Hyun-joon and Choi Dong-jin, inspectors at the Jung District Office, entered a tuna restaurant, looked at the menu and realized the price for ganjang gejang, or crab marinated in soy sauce, was listed as ranging from 60,000 won ($52.83) to 100,000 won.

The restaurant also had drink menus on its walls, but these also failed to list price information. When questioned about this, the owner angrily replied, “Why would you pick a fight when we don’t even have a lot of customers?”

Choi explained to her, “Not putting down the price information so that you can charge customers differently is a violation of food hygiene regulations.” He issued a correction order, which suspends the restaurant’s business if it fails to notify the district office of improvements within six months.

The next sushi restaurant the two visited listed its prices as “depending on market costs.” Similarly, a nearby steakhouse failed to notify customers of its meat price per gram, which prevents customers from comparing prices.

Kim and Choi inspected five restaurants in roughly two hours and issued correction orders to three. But this constitutes only a fraction of the 105 restaurants caught during inspections from early this month to Oct. 18 - Jung District Office designated October a month for intensive control on overpriced restaurants in Myeong-dong, Jung District, in central Seoul.

But overpricing restaurants are not the only war Jung District Office is waging; this year alone, 426 stores were caught selling 45,279 fake products, such as handbags, worth 38.1 billion won ($33.7 million) in all.

“We started the inspection for imitation good in 2012, when the stores openly sold such items,” said Song Woo-suk, a distribution order supervisor at the Jung District Office, “but it’s become harder to control them now that they are selling secretly.”

Despite such efforts, however, criticism remains over the leniency of punishment doled out for restaurants caught overcharging customers. The Jung District Office has issued a total of 62 correction orders to such restaurants during its regulation in May of last year, but not much has changed since then.

The district office also faces difficulties in carrying out inspections, as it is nearly impossible for its 12 supervisors to personally visit the roughly 1,800 restaurants in Myeong-dong alone. To compensate, staff members from the Korea Tourism Organization supported the inspection this month, while the city government promised a reward for individual reports against overpricing.

“The total number of visitors to Korea is expected to hit 16 million this year,” said Lee Hoon, a professor of tourism at Hanyang University, “but the revisiting rate is more important for tourism in Korea. We need to be aware that foreign tourists travel with a lot of local information via networks such as TripAdvisor.”