Ki aims for a position with IOC

Ki aims for a position with IOC 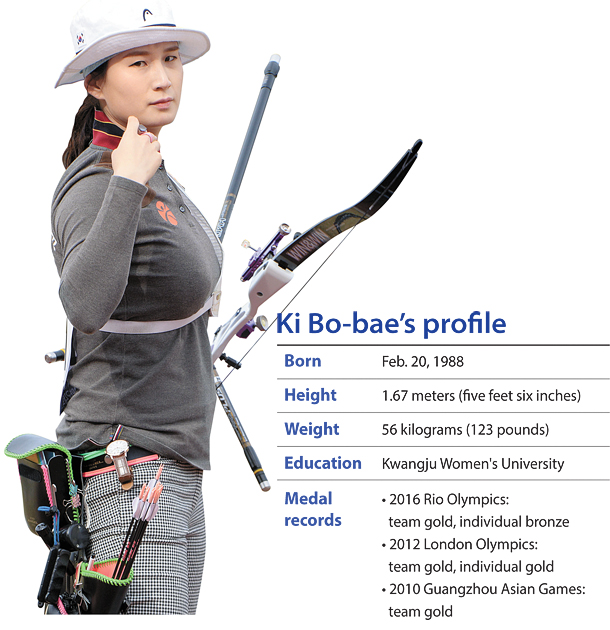 “Where do I see myself 10 years from now?” said Ki Bo-bae, a four-time Olympic medalist in archery. “It’s just a dream but after seeing Ryu Seung-min, I started to dream about becoming an International Olympic Committee (IOC) Athletes Commission member myself.”

Ryu is a table tennis player who became a member of the IOC’s Athletes Commission. Ki, who spoke to Ilgan Sports, an affiliate of the Korea JoongAng Daily, added that becoming an IOC Athletes Commission member “is any athlete’s dream.”

Many think Ki, an archer who’s won three Olympic gold medals and one bronze, is an athletic prodigy - but Ki doesn’t see it that way. “I can honestly say I work harder than other archers,” said Ki. “Results follow hard work. I know the sweetness of victory and winning medals that come with training hard. This is why I refuse to procrastinate and always push myself.”

Because of her mindset, Ki is often strict on herself. “Weighing my career as an archer, I would give myself about 80 points [out of 100],” she said. “I settled for a bronze in the individual event from the Rio Olympics. It’s a decent outcome, but for pros, it’s all about the records so I have to deduct 20 points.”

Many Korean fans would be thrilled to see Ki once more in the archery range four years later. Archers, unlike figure skaters or rhythmic gymnasts, can stay in their sport far longer. Considering how well Ki manages herself and her physical condition, it is entirely possible that she may be shooting for another medal at the 2020 Tokyo Olympics. But the 28-year-old archer says she is not ready to commit at this point. “At least for right now,” she says, “I am not thinking about being on the national team. Such thoughts just wear me out. Instead, I would like to stay where I am and give my all in each event. Then, naturally, I might have another shot at donning the Korean uniform.”

Ki leads a life in which she looks more keenly at the direction of her footsteps than their speed, but Ki is confident that once she sets the course of her voyage, she will be able to reach her destination eventually.

“I want to take a shot at the candidacy for a spot in the IOC Athletes Commission 10 years later,” said Ki. “Frankly, when Ryu was running for a position, everyone doubted that a Korean athlete would gain a spot on the commission. But when I saw him being elected, it dawned on me that if I go at it determined, it’s possible.”

Archery in Korea receives more attention and support, especially since it is sponsored by Hyundai Motor, one of the largest Korean conglomerates, than almost any other Olympic sport - and Ki is at the center of that. One day, by becoming a member of the IOC Athletes Commission, Ki hopes to help more archers obtain support.

But at the age of 28, she says she still has a few things left to check off on her to-do list.

Her year is filled with schedules related to archery. “The first event of a year is the national team selection event in March,” Ki explained. “Then until November, we have countless events to compete in. If the Olympics occur in that year, then our schedule gets more hectic.”

November until March is spent training and practicing for the coming year, she added.

“Gyeongridan-gil is a popular spot these days,” Ki said. “But I still have not been to it yet. When I first heard about it, I asked my friend what it was. It would be nice to sit in a cafe there and chat with my friends. I heard they had a fireworks festival in Yeouido recently? I still haven’t been to the parks around the Han River yet. Why does that festival coincide with National Sports Festival [an annual domestic sports competition during which events such as archery takes place]?

“Also, if I could have three weeks off, I would like to sleep as much as I can,” Ki continued. “And I would like to learn English if I get a break. It is a must to be able to speak English these days.”

But as the interview reached its conclusion, Ki said she feels more relaxed than before, especially after the Rio Olympics. “Now,” she sighed, “ I want to be able to invest in myself.”