What killed the Note7?

What killed the Note7? 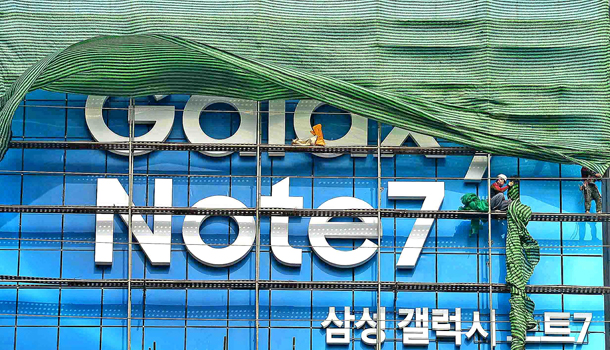 Samsung Electronics may be disappointed to find so many people exulting over its fall from grace. The world’s top smartphone maker stopped production of the Galaxy Note7 after learning of three cases of the cutting-edge phone catching fire from Aug. 24 to 30. Apple is staying mum as its latest iPhone 7 has apparently been catching fire even faster than the ill-fated Galaxy Note7 since its launch earlier this month. A buyer in Australia returned from surfing to discover his car on fire because his iPhone7 had ignited and burned the interior of his car to a crisp. But strangely, there was not much media hoopla over the iPhone explosions. A Google search of iPhone explosion gets 2.63 million related stories, while a similar search for Galaxy Note7 delivers a turnout of as many as 9.7 million. The U.S. media refers to the Galaxy Note7 debacle as a heat damage issue.

Samsung Electronics should pay little attention to the brouhaha and stick to what it has to do, which is to pin down the cause of the combustions. Finding the cause is not easy. There are many factors that could trigger combustion. Some phones burned while charging overnight, others while in transit, and some showed signs of overheating when not in use. If Samsung cannot recreate the explosions in its factories, it cannot persuade consumers that it has solved the problem. The next player in the bullpen — the Galaxy S8 series — may not even make it to the field. Consumers could suspect that new and advanced features like an iris scanner and dust- or water-free functions may have fatally stressed the Samsung device.

On Jan. 7, 2013, a maintenance worker discovered smoke in the freight compartment of a Japan Airlines Boeing 787 Dreamliner before takeoff from Boston’s Logan International Airport. All Nippon Airways 787s were stopped because of an electrical fire on board. The incidents made the U.S. Federal Aviation Administration order a review into the design and manufacture of the Boeing 787 Dreamliner. It traced the fires to lithium-ion batteries manufactured by GS Yuasa of Japan. The batteries were redesigned to contain overheating and fires. After stringent tests, Dreamliners were allowed to rerun four months later.

Samsung Electronics is using all of its best engineers as well as experts from the Korea Testing Laboratory to find the cause of the fires. The problem is whether overseas customers will find the results credible. One battery expert said the exact cause may never be conclusively identified. He suggested that it would be better to do a joint probe with international agencies that U.S. and European consumers rely on. The representatives from these agencies should be present when Samsung Electronics holds a press conference on its conclusions. Samsung Electronics is a multinational company and it should think and act globally. It should try to raise its creditworthiness by testing all of its prototypes publicly. Safe batteries can now determine the life of an electronic device.

Samsung Electronics should learn a lesson from the recall crisis of Coca Cola in 1999. The world’s biggest soft drink maker had to impose a 10-day ban on Coca-Cola products in Belgium after a number of school children were taken to the hospital complaining of stomachaches and nausea. Upon suspecting contamination in bottling, the company recalled 2.5 million cans and bottles in the biggest recall in its 113-year history.

The scare spread all over Europe. It was later discovered that mass hysteria was to blame. When one child complained of a stomachache, the others felt the same. Since then Coca-Cola remained the top brand in the world.

Samsung Electronic may have been too hasty about the second recall and discontinuation of the Galaxy Note7. There are rumors of a major shakeup at Samsung following the debacle with the Galaxy Note7. But the company must not forget what is important, which is identifying the cause of the explosions. Without that, Galaxy phones will never recover their reputation. Apple repeatedly brushed aside problems with the iPhone. Samsung Electronics should distinguish itself from its U.S. rival by hunting down the cause. It is the only way it can bounce back.