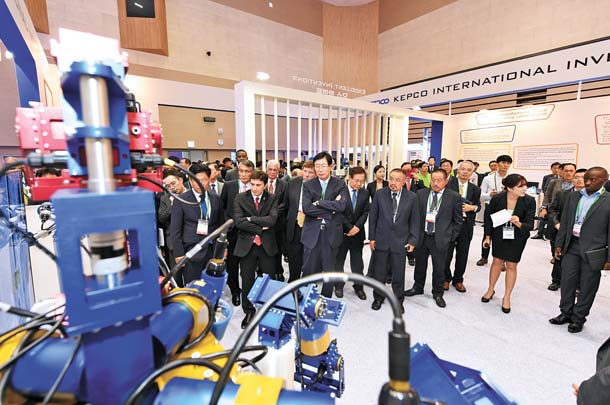 Cho Hwan-eik, CEO of Kepco, third from left in front row, takes a look at new technology on display at last year’s Bitgaram International Exposition of Electric Power Technology with business leaders and experts from Korea and overseas. The event received around 30,000 visitors from the general public last year, and this year’s iteration, which will run from Nov. 2 to 4, is expected to attract as many as 50,000 visitors. [KEPCO]

The nation’s sole power distributor, the Korea Electric Power Corporation (Kepco), will host an international exhibition next month in the southern city of Gwangju to showcase new electricity technology and discuss further cooperation with other countries in the field of energy.

The 2016 Bitgaram International Exposition of Electric Power Technology (Bixpo) is scheduled to begin on Nov. 2 and will last for three days at the Kimdaejung Convention Center, where nearly 4,000 business leaders and scholars from about 50 countries will gather to share research on the latest energy technologies and discuss new business opportunities.

Kepco also expects the event to attract as many as 50,000 visitors from the general public, including 1,000 from overseas. It is the second annual large-scale international electricity expo held in the country’s southern region after Kepco moved its headquarters to Naju in South Jeolla in 2014.

“This year’s slogan is ‘Clean Energy, Green Power,’ and we hope this will get more Koreans interested in technologies on electricity from attending the event,” a representative at Kepco said. “The event will help small and midsize Korean companies find opportunities to enter foreign markets by networking with foreign counterparts. We hope our event will become one of the most prestigious electricity exhibitions in the future.”

In particular, the power company is focusing this year’s event on the latest developments in renewable energy. Environmentally-friendly power generation has become a top agenda item for power companies around the world after 195 countries signed an accord in Paris at the end of last year to limit the rise of global temperatures to 1.5 degrees Celsius (2.7 degrees Fahrenheit) and review their carbon emissions targets every five years.

Korea was one of the parties to the Paris climate accord, and as the nation’s sole power generator and distributor, Kepco has been at the forefront of the government’s strong policy drive toward energy efficiency. The company recently moved its headquarters to Naju, a small city about a six-hour drive from Seoul, and its biggest ambition is to develop the region into a global energy technology hub called the Bitgaram Energy Valley, with the goal of drawing investors from the global energy industry.

Bitgaram, from where the Bixpo event gets its namesake, is a new city established near the Yeongsan River, which runs through both Gwangju and Naju, and which Kepco hopes to turn into the center of the local energy industry.

As part of its pursuit of alternative energy technology, Kepco has expanded its investment in energy storage system batteries. The system allows for storage of energy from renewable sources like solar and wind during periods of low power use. By storing energy in a secondary battery, problems like power overload during times of peak use can be resolved. 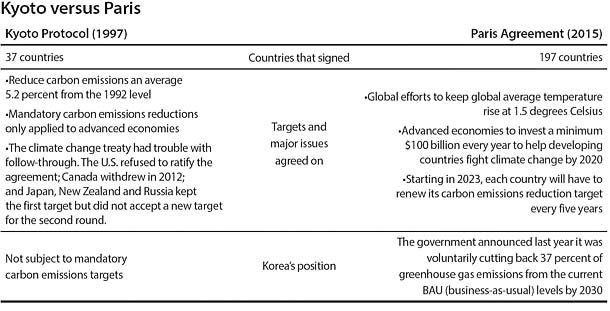 Kepco says it has so far built energy storage systems with capacity to store a total of 252 megawatts. The company expects to add 124 more megawatts to its capacity this year and next year, boosting total storage capacity in the system to 500 megawatts by 2017, enough to power 7,000 households that use 72 kilowatts a day.

“We will be able to save up to 320 billion won [$281.2 million] every year from now on with the 500 megawatts of energy storage system capacity,” a Kepco representative said.

The three-day Bixpo event that Kepco is hosting includes a technology exhibition with more than 520 booths from developers both here and abroad as well as four smaller exhibitions. Visitors will be able to experience new energy technology through virtual-reality and augmented-reality devices in the convention hall.

Participating companies include Korean giants like Hyosung and Samsung SDI and multinationals like General Electric and Microsoft.

A series of forums with chief technology officers and electrical engineers from major electricity companies around the world will be the biggest part of this year’s Bixpo.

On Nov. 3, chief technology officers from about 35 countries will gather to talk about the value and marketability of new technologies under development.

Kepco will host three special sessions throughout the event, and Tony Seba, an entrepreneur and professor at Stanford University, will give a special lecture on the future of the energy industry during the first session.

In the second session, experts will discuss how the energy system will look like in 2050, and the third session will be on smart-grid projects in Asia.

Other topics to be discussed during the event include new technologies in electricity generation, distribution and transformation; environmentally-friendly power generation; smart-grid power management systems; and high-voltage direct current technology.

Kepco has selected smart-grid and micro-grid system technologies as flagship growth engines and plans to implement them nationwide with the goal of ultimately exporting the technologies overseas. Micro-grid technology is particularly useful for power distribution in remote areas like islands, where such a system can be used to distribute power generated by renewable energy sources. 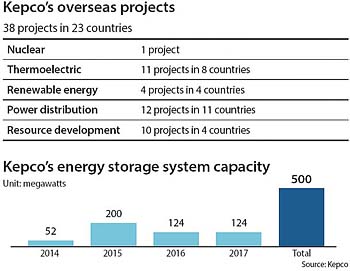 For the general public, there will be a variety of entertainment, including an orchestral performance, outdoor music events and a light show. For job seekers, Kepco and other public utility companies will hold employment events during the expo.

Kepco hosted its first annual Bixpo last year from Oct. 12 to 15, which featured a technology exhibition with over 300 booths. The event received around 30,000 visitors from the general public, and Kepco said domestic technology companies had discussed export projects with foreign counterparts worth a total of $672 million. A total of eight memoranda of understanding were signed just during the event.

Michael Howard, president of the U.S.-based Electric Power Research Institute, said he was able to envision new possibilities for electricity technology in the next 35 years after attending last year’s Bixpo.

Ever since the event, Kepco has moving up the ranks on the world stage. For the first time, the utility corporation made it to the Forbes list of the world’s top 100 public companies, jumping from 171 to 97 this year. The magazine named it the best company in the electric utilities sector, a first for an Asian power company.

The company says it will be able to operate such plants for over 60 years and anticipates they will bring in about $49.4 billion in profit, equivalent to exporting 2.28 million automobiles or 52 million cellphones.