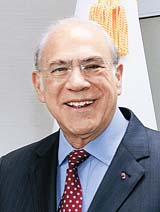 Korea needs to reform its labor market for the economy to survive, Angel Gurria, secretary-general of the Organization for Economic Cooperation and Development, said.

Gurria, who is in Seoul to celebrate the 20th anniversary of Korea joining the OECD, on Tuesday met with Korean Labor and Employment Minister Lee Ki-kwon and said labor reform will not only strengthen Korea’s fundamentals but it would make it easier for the country to counter external impacts.

“For Korea to catch up with top economies, Korea needs to ease regulations to half of those of advanced economics while relaxing the labor market,” Gurria told Lee.

This is not the first time that the OECD has recommended that Korea push for labor reform.

In May, an OECD report advised the Korean government to ease regulations that protect the jobs of regular workers while expanding social insurance for nonregular, or part-time, temporary and dispatched workers.

It also said Korea’s growth potential and social integration will be obstructed if an overhaul of the labor market doesn’t occur.

The Korean government has been pushing for labor reform, including expanding the performance-based salary system in the public sector, but has been gridlocked since early this year due to opposition from politicians and the labor community.

There have been numerous strikes, including those in the railroad sector in the last month.

The OECD secretary-general said he is willing to meet with Korean lawmakers who are opposing four major labor reform bills, and explain the importance of a reform to boost the Korean economy.

Gurria suggested a strong overhaul as the government’s effort have only led to a change of the peak-wage system, where older workers receive a smaller portion of their salaries but are guaranteed job security until an extended retirement age.

In response, Lee said the government plans to push a reform bill by the end of the year to achieve its goal of a 70 percent employment rate.

Gurria also suggested that the OECD and the Korean government work to solve the wage gap between conglomerates and smaller companies as well as between men and women.

During his keynote speech held at Westin Chosun Hotel, the secretary-general praised Korea’s achievements in the past 20 years, noting its advancement from a country that received economic assistance to a nation now providing such help to others. In the past two decades, Korea reported an average annual growth of 4.2 percent, while the national income per capita, which only accounted for 57 percent of the OECD member countries’ average, has risen to 85 percent. Korea’s exports, which amounted to $13 billion in 1996, have skyrocketed to $527 billion.

However, Gurria also noted several issues that Korea faces today, including a low birthrate, aging population, the lack of a female workforce and the gap between the rich and the poor.