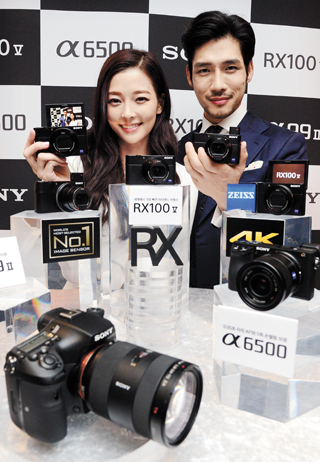 Models hold up new cameras from Sony - the RX100 V, DSLT A99 II and A6500 - at the Plaza Hotel in central Seoul on Tuesday. The RX100 V, which Sony describes as the fastest camera on earth, is a high-end model embedded with a 0.05-second hybrid auto-focus function that tracks the subject’s movement and can take 24 pictures per second. The DSLT A99 II, with its 42.4 megapixel lens, is able to take 12 photos per second, and the A6500 includes anti-tremble and auto-focus features that can be activated with the touch of a finger. [NEWSIS]