‘If you are not at the table, then you end up being on the table’

‘If you are not at the table, then you end up being on the table’ 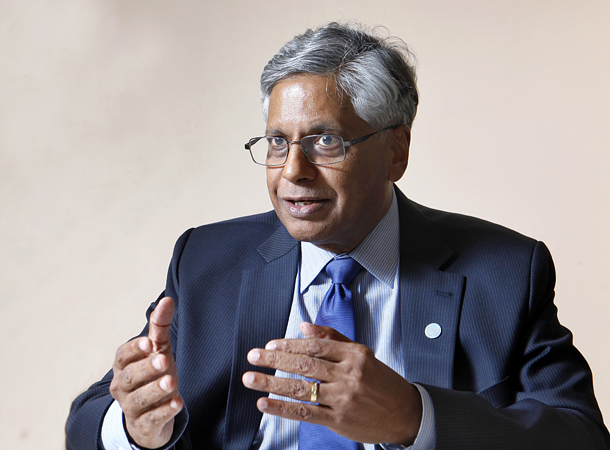 Kilaparti Ramakrishna, director of the United Nations Economic and Social Commission for Asia and the Pacific East and North-East Asia Office. [PARK SANG-MOON]

Korea’s international efforts to promote peace throughout the world did not begin with UN Secretary General Ban Ki-moon’s term, nor should it end with his tenure, said the director of the United Nations Economic and Social Commission for Asia and the Pacific (Unescap) East and North-East Asia (ENEA) Office in celebrating UN Day on Monday and the 25th anniversary of South Korea’s membership at the United Nations.

“Korea was a very active member of the UN right from its membership 25 years ago,” said Kilaparti Ramakrishna, director of the Unescap ENEA Office. “It became president of the UN General Assembly, president of the Economic and Social Council, played a member of Security Council, and played a lot of important and impressive roles in the UN, all that long before Ban became the secretary general. So even after Ban’s term is over, Korea will continue and is expected to continue at a minimum of the same kind of role, if not more.”

Ramakrishna heads the office that covers six member countries of ESCAP, namely China, North Korea, Japan, Mongolia, South Korea and the Russian Federation, the “one and only comprehensive multilateral hub for all six Northeast Asian countries.”

Prior to his start at the ENEA office from 2011, Ramakrishna worked for over five years in the field of environmental issues and policy and law, serving as the principal policy advisor to the executive director for the UN Environment Programme, and chief of cross-sectoral environmental issues and deputy director in the division of policy development and law. He was also the special advisor to the UN in drafting the UN Framework Convention on Climate Change.

The following is an excerpt from Ramakrishna’s interview with the Korea JoongAng Daily on Monday.


Q. As Korea celebrates its 25th year since it joined the United Nations, what are some key areas Korea should pursue to help the member states’ global efforts to promote economic and social developments?

A. For one, Korea needs to ratify the Paris Agreement immediately. The fact that an agreement that was adopted in December last year is entering into force on Nov. 4 this year is extraordinary. It’s extraordinary because it’s not just an environmental agreement. It was an economic agreement and a social agreement. It touches on everything and everybody. And yet we have the required number of ratifications from the world community to bring it into force.

You know what they say in America. If you are not at the table, then you end up being on the table. I’m not suggesting that anybody is going to do that to Korea. But having played the kind of leadership role that it played, it is time that it joins the rest of the countries.
I’m also talking about the visual aspect. It’s important to be seen, to be along with United States, India, China, Russia, the European Union and more. I hope Korea ratifies it quickly and joins the rest of them.

Critics point out that the Nationally Determined Contributions (NDCs) render the agreement nonbinding and not as powerful.

When countries submitted these NDCs, they were called Intended NDCs but now the “intended” has been dropped. So they are not voluntary anymore. You may say the NDCs are not as ambitious as one would like. I drafted the Framework Convention on Climate Change and worked very closely on the Kyoto Protocol, and from that point, the INDCs submitted by Korea are not very ambitious, but what Korea submitted is more than what it was willing to do before. And that is the same with a number of other countries.

We are not in an ideal world, and living in an imperfect world, you try to work with these imperfect solutions. They are not going to solve the problem tomorrow but it’s a foot in the door. The fact that these countries have come together and come up with these INDCs and are willing to call them NDCs in the Paris Agreement means they may not have given their all, but they have given some, and that some is not voluntary.


What are some areas of work that are unique to the Unescap ENEA Office?

There are those of social dimensions — an aging society and youth participation — but we also have [projects on] the environment and development and transport. The Ministerial Conference on Transport is one of those once-in-four-years meetings and this conference will be held in December in Moscow, and we are going to be discussing the future of transport; not just road transport, but railroad, maritime and intermodal transport. And closer to home, our office works with headquarters in Bangkok in bringing Mongolia, China and Russia together on an agreement [to connect the three with a transportation road].

You know about the Belt and Road Initiative. That’s another part of the connectivity. China is going to be part of it … And President Park Geun-hye talked about the Eurasia Initiative, [a project to build an inter-Korean railroad that connects to Russia’s Trans-Siberian Railway and onward to Western Europe] and so we’re going to be talking about that, as well at the ministerial conference.


The Eurasia Initiative has been put on hold since South Korea levied unilateral sanctions on the North after its nuclear test and rocket launch early this year. What kind of dialogues did the ENEA Office pursue among its member countries, including the two Koreas?

Our office had organized meetings with North Koreans for North Koreans on Special Economic Zones and on how to attract private investments. We told North Koreans that if they want people with money to come to their country, they need to have investment guarantees, rule of law and the ability to decide cases and disputes according to established norms.

But I think the key point is, as long as the sanctions are there, we are inhibited in terms of making any great progress with the country. Our operations have been scaled back significantly and so we are waiting with the rest of the world for the situation to improve and to see some kind of a political solution so that we can continue working with North Korea, whether this means the Eurasia Initiative or other areas of developments.


What are some areas of work that you think should be pursued more actively among member countries of the Unescap ENEA Office?

[On promoting gender equality,] this region is talking the right language, but not making much progress. In Japan, for example, Prime Minister Shinzo Abe went to the UN General Assembly and spoke eloquently about the importance of bringing women into the workforce. But it has not yet completely happened. It takes time.

And President Park Geun-hye has already reached the pinnacle of the country’s political thermometer, but that’s not enough. You need more [female] members in the legislative assembly, more ministers, and not only that, even in the private sector there are not enough [female] CEOs.

Secretary General Ban should get a lot of credit for what he managed to do in the United Nations, in bringing women into senior positions and encouraging countries to constantly think about sending women delegates to international conferences and appointing female members to various bureau meetings and elections and so on. He also created UN Women. In terms of legacy, I’d put women and climate change as major issues that he addressed.