After 2nd try, police have not autopsied activist

After 2nd try, police have not autopsied activist 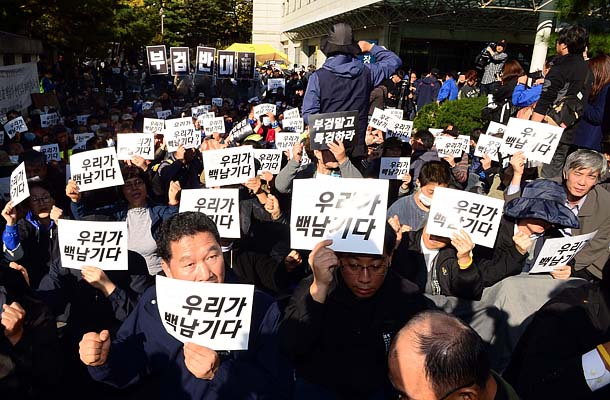 Civic activists hold signs that read “We Are Baek Nam-gi” on Tuesday at Seoul National University Hospital in Jongno District, central Seoul, as nearly 1,000 police officers try to carry out the autopsy warrant on the dead farmer. [NEWSIS]

A thousand police officers swarmed Seoul National University Hospital in central Seoul’s Jongno District on Tuesday but failed once again to carry out the autopsy of Baek Nam-gi, a farmer activist who died on Sept. 25 following a 317-day coma, which he entered after he was shot by a water cannon at an antigovernment rally last year.

Officers were confronted by roughly 600 civic activists who formed a blockade near the entrance of the funeral hall, where Baek is laid, for three hours before finally making the call to withdraw after Baek’s surviving family said they wouldn’t offer their consent under any circumstance. Hong Wan-seon, the chief of Jongno Police Precinct, said earlier in the day police would not carry out the autopsy warrant without the family’s agreement.

Tuesday was the final deadline for the warrant. As of press time, police did not mention whether they would seek another.

The second confrontation at the hospital on Tuesday came two days after police dispatched nearly 800 officers to the same place, but they ultimately withdrew when Baek’s family refused to cooperate. They and a civic group representing Baek have been demanding the government open a special investigation into the farmer’s death and not allow an autopsy to be performed, fearing possible meddling.

Immediately after Baek passed away last month, police announced they would conduct an autopsy to verify the cause of death. A local court struck down an initial request but later issued a warrant on the condition that the process be thoroughly discussed with Baek’s family.

Tensions escalated when it was later revealed that the Seoul National University Hospital doctor who treated Baek had written in his death certificate that the farmer died of cardiopulmonary arrest, categorizing it as a natural death. The victim’s family urged the hospital to change the document, saying Baek clearly died from the water cannon’s impact, but the doctor has consistently refused to do so.