Beijing tells travel agencies to cut travel to Korea by 20%

Beijing tells travel agencies to cut travel to Korea by 20% 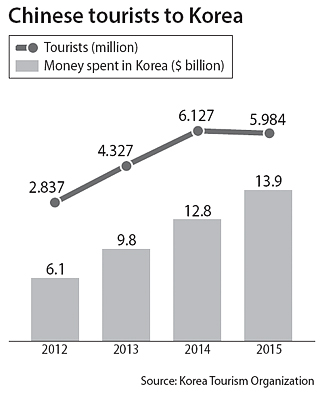 The Chinese government told provincial travel agencies to cut the number of tourists traveling to Korea by over 20 percent compared to last year, according to various sources on Monday.

Sources in the Korean Embassy in China, consulates and travel agencies said that city and provincial governments, including in Shanghai, Jiangsu, Zhejiang, Anhui and Shaanxi, contacted travel agencies in their regions either by phone or by meeting with executives and delivered this directive.

This notice included an order to come up with a plan to decrease tourism to Korea by the end of the month, halt promotions for group tourism, limit shopping schedules in Korea to one per day and impose a fine of up to 300,000 yuan ($44,267) if such policies are violated.

“I received a phone call from a provincial government official,” said a manager of a Shanghai-based travel agency for outbound tourists, “saying the notice was based on a meeting held by the China National Tourism Administration.”

The Korea Tourism Organization (KTO) and the Korean Embassy in China are weighing the repercussions such measures will have, but it is unclear why Chinese authorities have issued such orders.

Observers say this could be yet another attempt to hurt Korea for its decision to deploy the U.S. missile system, known as the Terminal High Altitude Area Defense (Thaad), which Beijing has strongly protested. Beijing has a history of using trade to strong-arm other nations.

An official at a Korean consulate in China remarked, “What was to come has come,” reflecting the view that this was indeed a response to the Thaad deployment.

Others, however, say this could be an attempt to decrease the negative effects of low-cost tourism. One travel industry insider said, “I am aware that the Chinese central government receives a lot of complaints from Chinese to address the damages incurred by low-cost tourism.”

A senior official at the KTO likewise said, “Because the Chinese government is well aware of the problems related to low-cost tourism, it is working on a Korea-China bilateral group to discuss this.”

The notice by Chinese authorities includes regulations on low-cost travel. Advertisements in brochures, online or shared on social media are to be banned and violators will be fined 300,000 yuan.

Whatever the reason, the impact is certain.

“Chinese authorities are not giving a clear explanation as to why they did this,” said Seo Young-choong, a director of KTO’s Beijing branch. “But we are concerned about the impact the decrease in Chinese tourists will have.”

Should the number of youke drop by 20 percent, this could translate to a loss of about 3 trillion won, which will have a chain reaction on airlines and local retailers, as well.

An airline executive based in Beijing said, “We see this as leading to a decrease in passengers and are communicating with headquarters to adopt a plan.”