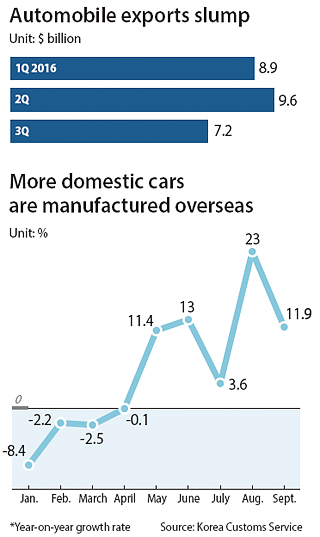 Korea’s automobile exports dropped sharply in the third quarter due to a lengthy strike by the nation’s auto workers in September.

The number of units exported dropped 19.4 percent year on year to 520,000 cars and dropped 24.9 percent when compared to the previous quarter.

“The exports fell significantly due to the Korean automobile industry’s strike, which dragged down production in general,” said Kim Yoon-sik, a director at the KCS. “The global economy that has slowed down appears to have affected Korea’s export figure and Korean automobile manufacturers that expanded their production lines abroad also had negative impacts in the third quarter.”

The number of Korean automakers manufacturing cars overseas continued to rise starting in May compared to the previous year. The year-on-year growth rate rose 23 percent just in August and 11.9 percent in September.

Exports to the United States fell 24.3 percent from $3.7 billion in the third quarter last year to $2.8 billion in the same period a year ago. Shipments to Saudi Arabia dropped 42 percent and fell 20.9 percent to Canada.

“Koreans bought fewer foreign made cars in the third quarter as the extended tax cuts on individual consumption tax on vehicles has ended in June,” said Kim at the KCS.