Outlook for 2017 keeps getting whittled down

Outlook for 2017 keeps getting whittled down 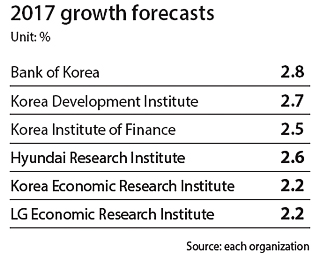 While a recent uptick in the real estate market helped prevent Korea’s economic growth from tumbling further in the third quarter, the same market is expected to hold back the economy’s expansion next year, according to a study by a local think tank.

The Korea Institute of Finance on Wednesday predicted next year’s growth at 2.5 percent, lower than the Bank of Korea’s recently adjusted outlook of 2.8 percent and the Ministry of Strategy and Finance’s 3 percent.

The institute said construction investment, a key contributor to keeping the economy from negative growth this year, will shrink next year as the government tries to cool the overheated real estate market and toughen qualifications for mortgages.

“In 2016, construction investment and domestic consumption drove economic growth. But the boost in those sectors will likely slow next year,” said Lim Jin, a researcher at the Korea Institute of Finance during a seminar explaining the forecast Wednesday.

“The trade balance in Korea remained in the black thanks to declining imports,” Lim said. “But the slowdown in imports will likely be eased in 2017 while the volume of exports will remain weak due partly to China’s slow economy.”

As for domestic consumption, the institute projected a tough outlook. Lim said the government strived to boost consumer spending by offering tax benefits for buying cars and other goods.

“The tax cut played a big part in managing growth in domestic consumption,” the researcher said, “But with the end of the cut, consumption will likely go down as there are no major forces driving it up.”

The institute predicted that domestic consumption will soften starting in the fourth quarter. In the third quarter, the government is offering financial incentives for people to buy energy-efficient home appliances.

The announcement is the latest in a string of reductions in growth rate predictions. The Bank of Korea trimmed its 2017 growth forecast to 2.8 percent from 2.9 percent earlier this month. Some analysts raised concerns that the mild cut by the central bank was a reflection of over-optimism by the government.

Even Angel Gurria, the secretary general of the Organization for Economic Cooperation and Development, who was in Seoul this week, hinted that the international organization could be lowering Korea’s economic growth outlook when announcing it in November.

The Korean consumers’ confidence in October slightly improved compared to the previous month, adding 0.2 percentage points to reach 101.9. But that sentiment has been influenced by hype about the real estate market.

A reading of below 100 indicates that the majority of people polled have a negative view.

“The recall of Samsung’s Galaxy Note7 and Hyundai Motor’s prolonged strike all contributed to the negative business outlook,” said Joo Sung-je, head of the statistics department at the BOK.

The survey was conducted between Oct. 12 and Oct. 19, right before a major political scandal involving the Blue House erupted.