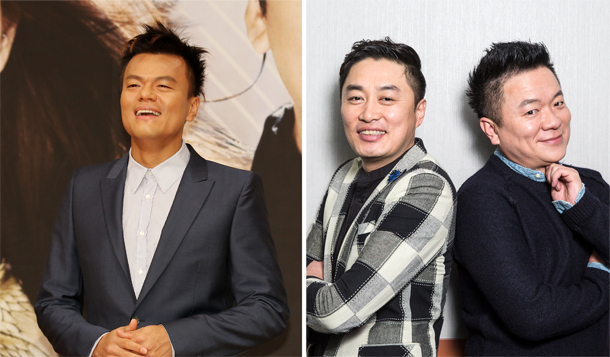 The collaboration will a part of SBS radio division PowerFM’s “20 Year Anniversary Song Project.” The duo consisting of comedians Jung Chan-woo and Kim Tae-gyun, who have been hosting their highly popular radio show for ten years, selected the JYP Entertainment producer for their project.

Their song “10,000 Won” will air for the first time during their live radio show on Nov. 1, which will feature Park himself as the guest. Afterward, the three will perform the song live at the “SBS PowerFM 20-Year Anniversary Concert: Power 20” on the same day.

“It’s an honor to be working with Korea’s greatest producer,” said Jung. “It was much more nerve-racking to be singing with [Park] than it was standing in front of thousands of people. We normally never practice our own songs, but we made sure to come prepared for this track.”

Park also expressed his excitement to have worked with the duo, saying, “I know how much energy they have when they go up on stage, so I’m going to have fun as well.”