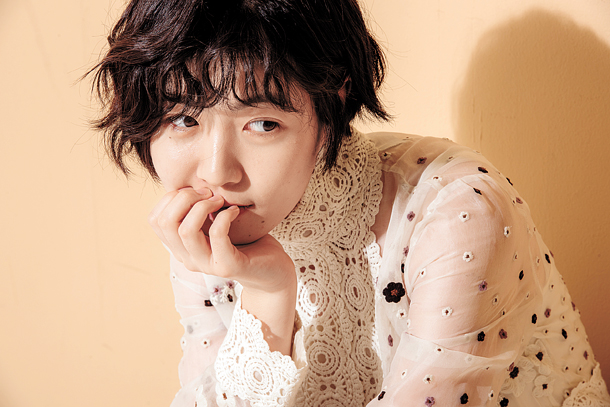 Actress Shim Eun-kyung, who has been appearing in films since she was 12 years old, is creating a buzz with her new film “Queen of Walking.” In the film, Shim plays Man-bok, a high schooler who gets carsick in any vehicle she rides. So, she spends four hours a day walking to and from school. She sleeps during classes and doesn’t really know what to do with the future, nor has she ever really thought about it. But then comes a day when she starts to dream of something - becoming a race walker. For the first time in her life, Man-bok wants to be good at something and the audience sets out with Man-bok on her journey to chase her goal.

JoongAng Ilbo sat down with Shim to gather her thoughts on playing Man-bok in the film, and how it influenced her acting career.

Q. Was it easy for you to connect to your character Man-bok? 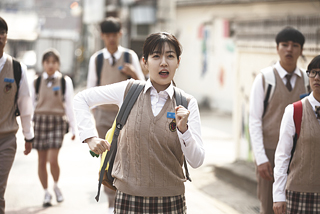 A. I’m quite similar to Man-bok in many ways, and that’s why I really wanted to take part in “Queen of Walking.” Apart from the fact that Man-bok gets carsick in whatever vehicle she rides, we have very similar characteristics. We’re both optimistic and bright, and we’re also both sleepyheads. Just like Man-bok, I was an ordinary student, but had a whole lot of fun at school.

You appeared on TV quite a bit as a child actress. Was living an ordinary life possible?

The only difference I had with my friends was that I had been an actress since I was little. Apart from that, I was just like all other teenagers. I’m pretty sure that a number of my friends didn’t even know that I appeared on TV. Even those who knew thought it was cool only in the beginning. I went to school often, and I didn’t act much differently from other students, so people didn’t find it special for that long.

Even through the screen, it was possible to feel that you were really enjoying playing Man-bok. Could you tell us a bit about that?

Yes, I did have fun, and it’s because I empathized with the story. While reading the script, memories about the worries I had at that stage of my life kept on popping up. Around that time I pondered so much about whether to continue acting or not, and wondered what kind of grown-up I would become. “Queen of Walking” is a film that comforts worried teenagers by telling them that it’s okay to move slowly. I went through the same stage of life as well, so I wanted to hand on that message to the audience.

I’m guessing you’ve been trying to step out of your typical image of being a child actress, but Man-bok is a high school student. Did you hesitate before taking the part?

I thought a lot about that before receiving the script. I’m sometimes called a child actress to this day, and many people tell me that I still seem like a high school student. After growing up, I thought about ways to grow into a more developed actress. Hence, I naturally avoided taking part in student roles, and worried that I must seek ways to change my image.

Did the script change your mind about that?

It changed my mind greatly. I think “Queen of Walking” will work as a remarkable turning point in my acting career. While reading the script, this thought struck me - It’s important to show that I am maturing through each piece. Whether I was portraying a student or not was not the important part. It’s not like playing a high school student will keep me from growing out of my “child actress” image. In fact, recalling memories and acting them out felt comfortable, so I really liked it. I understood the feelings of teenagers much better than when I took part in the film “Sunny” (2011).

Did your own memories as a student help much in understanding your character Man-bok?

Yes. Experience does help a lot. I realized the power of experience while shooting this film. You can’t even buy it with money, that’s how valuable experience is. Playing a teenager when I was a teenager was very different from doing so as an adult. Now that time has passed, I was able to view my past more clearly, and that helped me to view Man-bok with more truthful eyes.

Man-bok has to walk to and from school for a total of four hours everyday, which explains her walking skills. Do you personally enjoy walking too?

I like walking, but I can’t do that for so long. I don’t think I’m as physically strong as Man-bok. It’s really hard to walk for four hours everyday.

Did you have any trouble playing a race walker in the film?

Man-bok is a rookie athlete, so it was okay to be a bit awkward in posture. When her coach suggests Man-bok try out for race walking, she asks him, “What is that?” My first reaction was exactly the same. I didn’t really know what race walking was. For me, it was a bit easier since I played Man-bok, who’s just a beginner, but I think for Park Joo-hee, who played Su-ji, one of the most talented race walkers in the nation, it would have been difficult. Joo-hee had to pay lots of attention to her posture and other small details.

When people think of race walking, many imagine walking in a funny way. How was it now that you’ve actually tried it?

Like other people, I thought I would need to stick my butt out and waddle a bit. But after I actually learned how to do it, I came to find it very interesting and attractive. It has a lot of strict rules regarding posture. A racer gets disqualified the moment both of their feet are off the ground at the same time, and race walkers, in fact, do not stick their butts out. It just seems like that because they don’t bend their legs when they walk. They need to walk with a very straight posture. To sum it all up, detail is very important in race walking.

In the film, Su-ji keeps on telling Man-bok to try her absolute best. Have you, in your own life, done something that strenuously?

Like race walking was all Man-bok had, acting has been all I have had. I once thought, “What else could I do? If I happened to find a new hobby, would I be less stressed out about acting?” So back then, I learned various things, but not one of those had me concentrate as much as I did when acting. I still want to experience other fields and try them out, but I’m not sure what else I could do this well.

Would that also mean that there’s no other thing than acting that interests you as much?

When I was young, acting made me happy. But after some time, a lot of other thoughts began to strike me. “Am I doing this the right way? What attitude should I have when acting?” In fact, there’s no right answer in acting, but I kept on questioning my acting skills. I think that I still have a lot to learn as an actress, and that’s why I need to work hard in this area, like Man-bok did everything to enhance her race walking skills.

From “Sori: Voice from the Heart” to “Queen of Walking,” you’ve appeared in many pieces this year. Do you have anything to add about that?

I’d like to continue to appear in a number pieces in the future as well, whether it is as the main character or a minor role like in “Train to Busan” (2016). If the part allows me to show the audience the new Shim Eun-kyung, and if it’s fun to take part in, I’m open to anything. How much I appear in the film is not that important to me. The reason why I took part in so many pieces this year was because I wanted to work with various directors, and also wanted to help in each of those pieces.

You’re going to be on screen in a number of films next year, including “Fabricated City,” “Marital Harmony,” and “Special Citizen.” Do you have anything to say about that?

I guess I’ll be appearing on screen quite a bit next year. If I were to tell you that I’m not afraid of what the audience has to say, it’d be a lie. But compared to the past when I was so afraid of what people said about my performance, I’m trying not to be so agitated these days. I think it’s best to just enjoy this time that I’m having.