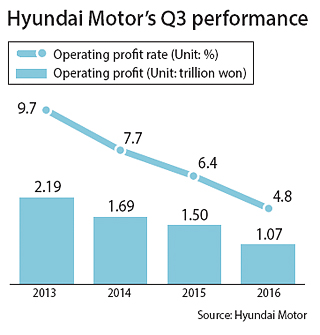 Hyundai Motor, the nation’s top automaker, posted its lowest third-quarter operating profit since 2010, a consequence of labor strikes and poor sales in emerging markets that have been racking the carmaker since July.

The performance was worse than the already low expectations issued by local brokerage houses, which predicted the automaker would at least reach 1.3 trillion won in operating profit.

“The third-quarter performance was inevitably affected by the prolonged labor strikes that led to factory production suspension,” a Hyundai Motor spokesperson said. “There was a rebound on the back of expanded premium cars and sport utility vehicle sales, but it wasn’t enough to compensate for the loss generated from domestic production suspension.”

Expanded marketing costs for the Genesis brand, which launched in the United States in September, and increased R&D investment also factored into the deteriorated profit.

The number of vehicles sold globally also shrank as emerging markets like Russia and Brazil showed weak demand for cars due to an economic slump. Sales in China stabilized, though slow growth in advanced economies like the United States hurt performance.

During the July-September period, Hyundai Motor sold a total of 1.08 million units, a 3.3 percent year-on-year drop. This is the worst performance since 2012’s third-quarter performance, when it sold a million units.

“It will not be easy to achieve the goal set for this year due to the economic slump in emerging markets like Russia, Brazil and the Middle East,” Choi Byung-chul, the company’s chief financial officer, said during a conference call at Hyundai Motor headquarters in southern Seoul on Wednesday.

Hyundai Motor’s sales goal for this year is 5.01 million, but it has so far only sold 3.5 million units. Analysts believe a major turnaround in the fourth quarter is unlikely.

Nonetheless, the automaker is holding its breath and gunning for a breakthrough with fresh lineups.

On Tuesday, the automaker unveiled a full-model change version of its flagship Grandeur IG premium sedan, which comes five years after its previous HG model. It will go on sale next month in Korea.

In China, the company recently completed its fourth plant in the country in the southern city of Changzhou. The factory is capable of producing 300,000 vehicles a year. A newly-unveiled Verna is expected to boost local sales.

And earlier this month, the company concluded a wage deal with its labor union, putting an end to nearly a five-month-long negotiation period that included on-and-off walkouts by the union.

“Even if market conditions are not looking good for Q4, the production line is back in normal operation and we have many new cars to be launched in major markets,” Hyundai Motor said in a media release. “We are going to put the best effort in upping our performance.”