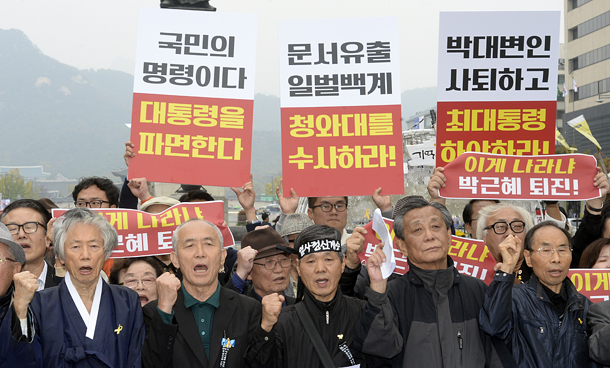 Civic activists hold a press conference in Gwanghwamun Square in central Seoul on Wednesday to demand that President Park Geun-hye step down. [NEWSIS]

Questioning the legitimacy of President Park Geun-hye’s leadership, a public clamor for her resignation boiled over Wednesday following a scandal over one of her friends’ involvement in state affairs.

The student association of Ewha Womans University issued a statement Wednesday morning condemning Park’s allowing of a friend to interfere in the government. “The president, the leader of the country, was controlled by one person, Choi Soon-sil, rather than protecting democracy,” the statement said.

Park and her administration were reeling from their biggest scandal after the friend, Choi, was exposed as having far more influence than she should have — to the point of being a kind of power behind the throne.

Choi, who fled Korea for Germany after the scandal broke, is a daughter of Park’s former mentor, the late Choi Tae-min.

Park issued a televised apology Tuesday for having allowed her friend to review and edit her speeches, but the 90-second statement only fueled public outrage. More revelations followed later Tuesday that Choi allegedly had access to top-secret national security documents and influenced personnel appointments in the Park administration.

“During the 2012 presidential election, Park’s campaign slogan was ‘A country where your dream comes true,’ but we are actually living in a country where Choi’s dream was being realized,” the Ewha students said in their statement. “If the people think she’s unfit, she must resign.”

Students at Sogang University, Park’s alma mater, echoed the outrage. “Park allowed Choi to run the country and lost her qualification as the president,” the students said. “The current administration, where secret friends are deciding state affairs, has no reason to exist any further.”

They said an investigation must take place to lay bare the truth, and Park must relinquish the presidency if the public do not accept the outcome.

A statement was also issued by the student association of Kyung Hee University criticizing Park for having given grave authority to Choi, who was neither elected nor appointed to any official post. “This is a grave threat to democracy,” they said.

A group of university students held a demonstration at the National Assembly, demanding lawmakers impeach Park.

Civic groups are also condemning Park. The People's Solidarity for Participatory Democracy held a press conference to demand an independent counsel probe into the Choi scandal. “The people did not elect Choi as the president,” said Kim Sung-jin, a lawyer and a senior member of the group. “By delegating her power to Choi, Park denied democracy.”

In a general assembly of lawmakers of the main opposition Minjoo Party of Korea, Reps. Sul Hoon and Lee Yong-deuk said Park should no longer serve as president.

“The national dignity is disgraced in front of other countries,” Rep. Lee told the JoongAng Ilbo. “The people’s rage and disappointment have reached a peak. In order for us to represent the people and their anger, we at least demand she step down.”

“I don’t think she can stand it,” Rep. Sul said. “If she steps down, we should hold an election within 60 days. We must create a taskforce to deal with any contingency.”

Seongnam Mayor Lee Jae-myung also demanded Park’s resignation in a radio interview. “Even if she refuses to step down and stays on, she will eventually be impeached,” he said. “She must resign and a bipartisan, neutral cabinet must be formed to run the country.”

The Minjoo Party, however, did not formally adopt an official line on Park’s impeachment or resignation. For now, it called for an independent counsel probe and a complete reshuffle of the Blue House, fearing the political repercussions of a hasty move.

The ruling Saenuri Party held an urgent meeting of its lawmakers in the afternoon and decided that an independent counsel probe should take place to investigate the scandal.

The allegiance of Park loyalists in the Saenuri Party, including Chairman Lee Jung-hyun, was shaken. “Park must replace everyone responsible directly and indirectly for the scandal,” Lee said.

Voices grew inside the party that Park must surrender her Saenuri membership and the entire cabinet and the presidential secretariat must resign. Chairman Lee recommended a complete overhaul of the cabinet and Blue House, and Park responded that she will seriously consider it.

As public rage boiled over, senior politicians worried that the country will face an unprecedented leadership crisis.

“The president must surrender her party membership and form a bipartisan cabinet in consultation with the National Assembly,” said Moon Jae-in, former chairman of the Minjoo Party and Park’s challenger in the 2012 presidential race. “If the president chooses that path, the opposition parties will cooperate.”

Elder statesmen of the country urged Park to offer a more sincere apology and seek help from the ruling and opposition parties.