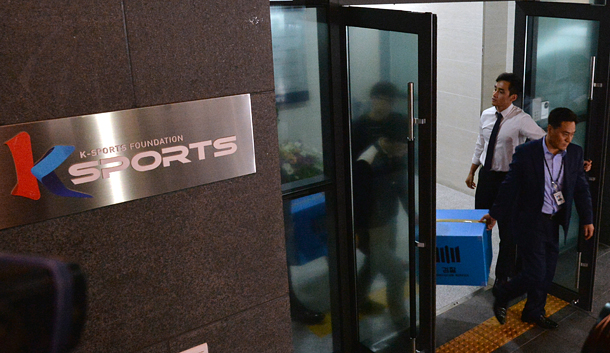 Prosecutors on Wednesday raided two foundations suspected to have been virtually created by Choi Soon-sil and the Federation of Korean Industries (FKI) in a widening probe into the 60-year-old longtime friend of President Park Geun-hye.

Investigators raided the headquarters of the Mi-R and K-Sports foundations in Gangnam District at around 9 a.m. on Wednesday as well as the FKI in Yeouido and the residences of Choi and those of her acquaintances said to have been involved in the two foundations.

At the center of the probe is the allegation that Choi strong-armed conglomerates to make contributions worth a staggering 77.4 billion won ($68.3 million) using her close connection to President Park, whose relationship with Choi dates back to the 1970s.

A prosecutor assigned to the case told the JoongAng Ilbo that the raids were conducted to find out how the foundations in question were established. Some have asked why it took nearly a month since the case was submitted to prosecution for investigators to seize evidence.

The raid came three weeks after the prosecution assigned the case, nicknamed “Choi-gate,” to the 8th Criminal Affairs Department, a team that normally handles low-profile cases.

Some critics saw the assignment of the high-profile case to such a team as a sign of hesitancy by prosecutors to get to the bottom of things, as it may seriously undermine the legitimacy of the Park administration.

These impressive achievements led to suspicions that companies were virtually forced by Choi to hand out money.

Investigators are not ruling out the possibility that the presidential senior secretary for policy coordination, An Chong-bum, pressured companies to make contributions in collusion with Choi.

Choi and her daughter, Chung Yoo-ra, remain at large, though the two are thought to be in Germany. Choi’s ownership of real estate properties in Germany, including a hotel 40 kilometers (24.8 miles) northwest of Frankfurt, has raised questions over the source of the money used to finance these purchases and prosecutors are now looking into whether Choi embezzled money from the two foundations by funneling it through shell companies set up in Korea and Germany.

It is suspected that while Choi did not carry official titles in the two firms, she was behind their daily management and may have handpicked her own acquaintances to operate as executives at the two foundations.