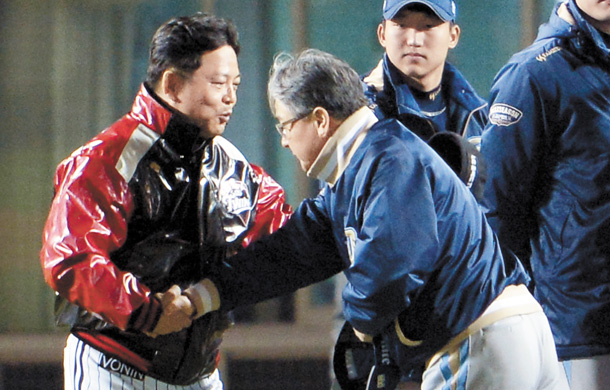 The LG Twins were underdogs who burst out of nowhere and made it to the final round of the postseason before the Korean Series, but now they’ve wrapped up their season on Tuesday after a 3-8 loss to the NC Dinos. Yang Sang-moon, the skipper, and the rest of the team may have left the dugout silently but their season performance earned them riotous applause from the crowd, as their run was the stuff of sports legend - a stampede by a team of dark horses.

Although the Twins had a swift start at the beginning of the season, they quickly fell apart, going all the way down to the eighth by the end of July. With only five top teams able to qualify for the postseason, the chance for the Twins, who were behind then-fifth place team SK Wyverns by more than four games, seemed bleak.

As the Twins’ chance diminished day by day, fans’ criticism of Yang grew. Yang considered this year to be a crucial shift, mobilizing younger players such as Ahn Ik-hun, a 20-year-old outfielder, while letting go of veterans such as Lee Jin-young, a 36-year-old outfielder who also played in the national team. But many fans felt such drastic restructuring made the Twins unstable in fielding as well as in batting, and some even called for Yang’s removal.

But Yang’s bold move paid off. The Twins had a late run and went from eighth in July to finish fourth overall by the end of the season.

They then took down the KIA Tigers in the wild card series and subsequently the Nexen Heroes in the second round of the postseason, reaching all the way to the threshold of the Korean Series. Granted, the Dinos, who finished second, posed a serious challenge for the Twins to overcome, but their late form was more than enough to keep their fans smiling. And the impetus behind this turnaround was, it turned out, Yang’s controversial decision to field young players.

After the game on Tuesday, veterans such as designated hitter Park Yong-taik and pitcher Bong Jung-keun left the dugout with their heads down, as if blaming themselves for the series loss.

But as they stepped out of the stadium, no seats near first base were vacant, as fans filled up the area, consoling the players and the coaching staff. The Twins reciprocated feeling with a banner that read, “Thank you for your support and we will see you again next year.”

“We gained a lot this season,” Yang said during the post-match interview, “and as everyone knows, we weren’t at first really considered contenders for any title. So the players worked hard and pushed themselves. I think that wore everyone out physically by the end.”

He added, “We’ll make sure we come out a better team after spring camp.”