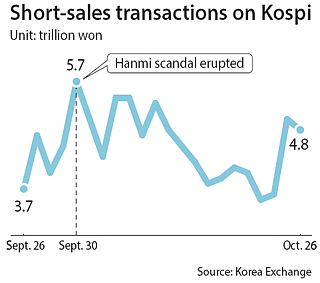 Short-selling and related regulations are under scrutiny again after some of Hanmi Pharmaceutical’s investors are found to have raked in huge profits through alleged insider trading.

Institutional investors profited big by selling a massive amount of shares of the pharmaceutical company before the stock price plummeted after it announced it was ending its contract with Boehringer Ingelheim on Sept. 30. The company is accused of leaking information about the termination to investors, giving them time to dump 50,000 shares.

Short-selling refers to the selling of a security that the seller does not actually own, and is made on the assumption that a security’s price will fall and will be purchased later at a lower price. The practice isn’t illegal, but the investors’ bet that Hanmil’s shares would fall raised suspicions about illegal trading.

In response to a public backlash, financial authorities have scrambled to strengthen rules on short-selling.

Jeong Chan-woo, the new CEO of Korea Exchange, suggested this week that short sellers be barred from buying new equity securities on a secondary offering of the holding that they shorted.

“A measure to restrict short sellers from buying new stocks is being discussed,” Jeong said Tuesday. “Some advanced countries adopt the measure to prevent abusive shorting.”

Short sellers often participate in the secondary offering at a discount. Sellers often borrow shares on securities lending, then buy the discounted shares and return them.

But critics say that the measure should be aimed at leveling the playing field between short sellers and individual investors.

The Financial Consumer Agency said regulators should be focused on amending rules on disclosure and stiffening penalties for illegal trading.

“Under the current rule, the announcement regarding the technology transfer contract is categorized as autonomous disclosure section, allowing the companies to publicly disclose the information a day after it received the information,” said Chung Yoon-mo, a researcher at Korea Capital Market Institute. “But [the regulator] should review whether such information can be classified as mandatory disclosure,” the researcher said.

The country’s top financial regulator, said that it is working to revise regulations on short selling.

“The rules on electric disclosure system is also of our concern,” an official at FSC said.

Still, analysts said banning short sellers from buying new equity would not curb unfair trading. Others are advocating rigorous monitoring and stiffer penalties. Under the current rules, those involved in illegal transactions can face up to 150 million won ($131.2 million) in fines while imprisonment is rare.

Three people in the Hanmi case have been charged with leaking information, though the prosecution hasn’t launched an investigation into institutions involved in short selling.