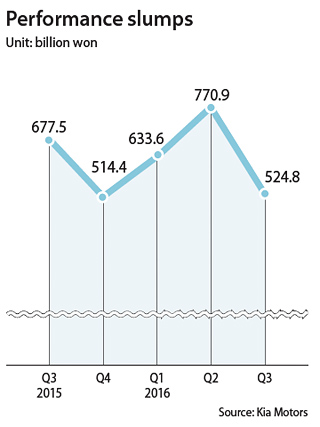 Kia Motors’ profit slumped over 22 percent in the third quarter, dragged down by multiple labor union walkouts, a strong Korean currency and the termination of individual consumption tax cuts on cars.

The automaker reported 524.8 billion won ($459 milion) in operating profit in the third quarter, falling 22.5 percent from a year ago.

A day before, affiliate Hyundai Motor posted a 29 percent drop in profit for the same quarter, also on a labor strike and unfavorable market conditions.

Kia Motors’ performance improved through the first half the year. Both revenue and operating profits have improved substantially - revenue grew 14.7 percent while operating profit advanced 20.8 percent - compared to the previous year.

However, disputes on wage negotiations with its labor union led to consecutive strikes, in which the company incurred losses and production delays.

The disputes are ongoing. The union decided on a four-hour partial walkout Thursday even after the automaker’s weak earnings reports. The strong Korean won also pushed down overall exports.

“We weren’t able to carry on with improving performances we have shown from the fourth quarter last year,” said Han Chun-soo, vice president of Kia Motors.

“Walkouts resulted in delayed production of 64,000 cars in the third quarter, which also led to sales loss.” Profit to sales ratio in the quarter also declined to 4.1 percent from more than 5 percent in the previous two quarters.

Han also noted its “annual sales target may be set back.”

The carmaker, along with Hyundai Motor, set a goal to sell 8.13 million cars by year’s end, with a 3.12 million target for Kia Motors.

The company sold 2.14 million cars through the third quarter, down 2.1 percent from a year earlier.

Still, Kia aims to strengthen its presence in developing markets through its new Mexico facility and expanding sales of more profitable cars such as recreational vehicles.

Kia’s factory in Mexico was completed in May.

Through September, Kia car sales in Latin America increased by 27.9 percent year on year boosted by favorable K3 sedan sales made in the Mexico facility.

By exporting Mexico-produced cars to more than 80 countries, Kia aims to secure more market share in Latin America and nearby emerging markets.

The Niro RV was released in the European markets in the second half of this year. “As Niro is launched in other global markets, the sales portion of RVs will be greatly expanded,” the company said in a statement.

The Niro will be released in the United States by the first half of next year. Sales of the Sportage, Sorento and Carnival SUVs are stable.