Hit hard by the Galaxy Note7 debacle, Samsung Electronics Thursday reported the worst quarterly operating profit at the division responsible for smartphones ever since it started making smartphones.

Operating profit for the July-September period for Samsung’s IT and Mobile Communications (IM) division was 100 billion won ($87.6 million), a 95.6 percent decrease from 2.4 trillion won in the same period a year earlier. That division’s operating profit in the previous quarter was 4.32 trillion won.

The beleaguered tech giant posted revenue of 48.82 trillion won for the quarter ending Sept. 30, down 7.6 percent from a year ago, and total operating profit of 5.2 trillion won, falling 29.7 percent on year, according to the earnings report.

The results correspond to a revised earnings outlook Samsung issued on Oct. 15 in a regulatory filing - four days after deciding to discontinue the troubled Galaxy Note7 phablet. A quarterly earnings guidance issued on Oct. 7 - four weeks prior to the announcement of official results, as is customary - Samsung estimated third-quarter operating profit to have grown 5.55 percent year on year to 7.8 trillion won. 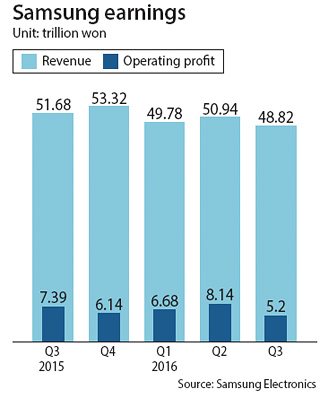 “It is highly likely that operating profit will recover to the mid 7 trillion won level in the last quarter,” said Song Myung-sup, an analyst at Hi Investment and Securities.

Samsung was forced to recall and destroy all the estimated 4.3 million units of the Note7 produced or distributed from Aug. 19, the date of initial delivery, through Oct. 11, the day the model was discontinued.

But the scrapping of the Note7 has been followed by increased sales of Galaxy S7 and S7 Edge, the preceding flagship models that were released in March, as well as mid- and low-priced models such as Galaxy A and J, said Lee Kyeong-tae, vice president of the IM division, during a conference call with investors and analysts Thursday morning.

“We expect alternative models to make up for [the losses and damages from] Note7,” he said.

Semiconductors, led by high-density, high-performance mobile and server products, including the V-NAND based solid-state drive, served as a meaningful buffer for the worst-performing IM division, which includes smartphones.

“Improved demand for server and mobile memory chips has propelled prices of DRAMs and NAND profitability has been enhanced on the back of rising demand for 3-D NAND flash memory,” said Lee Se-chul, an analyst with NH Investment and Securities.

He noted that the only remaining industrial sectors in Korea that China has failed to catch up with are semiconductors and organic light-emitting diodes, adding that a global undersupply of NAND flash memory chips is expected to continue for over the next three years.

Lee of Samsung said the company expects difficulty until the first quarter of next year but “will achieve a business turnaround with a new flagship smartphone model,” adding the company would launch it “after thorough inspection and once its safety is guaranteed.”

The Galaxy S8, which will be shown in February at the annual Mobile World Congress in Barcelona and go on sale in March at the latest, will offer hardware focused on design and the camera, Lee said. In software, Samsung will introduce artificial intelligence for the first time in any Galaxy phone, he said.

The company plans to connect not only smartphones and tablets but all services and products under the Samsung umbrella, including TVs, through an AI-backed, conversation-based interface.

Samsung’s AI is likely be supported by Viv Labs, an American start-up that Samsung acquired earlier this month.

Lee said the company is still figuring out how to make bendable or foldable smartphone displays.