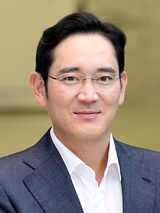 Shareholders of Samsung Electronics voted Thursday to appoint Vice Chairman Lee Jae-yong to the company’s board of directors, eight years after his bedridden father, Chairman Lee Kun-hee, stepped down from the board of the tech giant.

Even though Jae-yong has yet to be promoted to the chairman post, his joining of the board officially completes the leadership transfer at the country’s most valuable conglomerate to the third generation of the Lee family.

The transition follows patriarch Lee’s hospitalization after a heart attack in May 2014.

The Thursday vote at an extraordinary general meeting of shareholders in the Seocho headquarters of Samsung Electronics in southern Seoul took place after the board of directors on Sept. 12 nominated Jae-yong as a board member, although he has been de facto commander-in-chief for a while.

The board now consists of four executives from Samsung including Lee and five external members: three professors, one lawyer and a former banker.

Vice Chairman Lee is the second among the three children of Chairman Lee to assume a post in the Samsung Group that will allow him to appoint CEOs, manage company assets, administer investment plans and relocate subsidiaries, effective on Thursday.

Hotel Shilla CEO Boo-jin, the older of Jae-yong’s two younger sisters, was named to the board of her hotel in 2011.

“In order to respond to rapidly changing business conditions and to achieve sustainable levels of growth, the board has agreed that now is the right time to nominate Mr. Lee as a member,” said Kwon Oh-hyun Kwon, vice chairman and CEO of Samsung Electronics. “Mr. Lee’s election to the Board will allow him to more actively participate and take formal responsibility in the company’s important decision making, contributing to creating long-term, sustainable value for all of our stakeholders.”

Kwon went on to promise that the board will provide the leadership to take Samsung Electronics to the next level of success, helping the company focus on “timely investments, business re-organization to enhance core capabilities and creating a more open corporate culture.”

Vice Chairman Lee did not show up at the shareholders meeting and was not expected to.

In his past two years at the helm, Samsung has been going through major corporate restructuring to prepare for the leadership transition. More changes are expected.

Robert Yi, chief of investor relations at Samsung, said in a conference call Thursday that the company is reviewing “the entire proposals” made by U.S. hedge fund Elliott Management earlier this month on a major corporate makeover and will respond with “broad directions” by November.

Shareholders also approved Samsung Electronics’ spin-off of its printing business into a separate company as of Nov. 1 and the sale of a 100 percent stake of the newly created company to HP, along with its overseas assets.