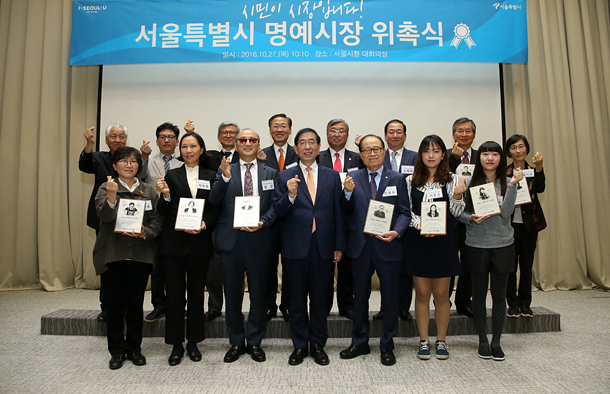 Seoul Mayor Park Won-soon, center front, stands at the Seoul City Hall with 14 honorary mayors he appointed Thursday to serve for a year as a bridge between the people and the government in different fields ranging from immigration to child advocacy. [SEOUL METROPOLITAN GOVERNMENT]

Seoul Mayor Park Won-soon appointed on Thursday 14 honorary mayors of Seoul, including an elementary school student, the head of a Vietnamese community in Korea and a president of a merchants’ group at a traditional marketplace, to serve as a bridge between the government and the people of Seoul.

“The honorary mayors of Seoul each represent a specific field and will help the city government draft realistic policies for the people,” Park said. “The city government will do all that it can to support their work.”

The honorary mayors include Han Chang-kyu, professor at the Ministry of Justice’s Korea Institute for Judicial Education; Nam San, head of the Seoul branch office of Korea Blind Union; Kim In-ha, 12, of Gaewoon Elementary School and president of the Children’s Council of Seongbuk District Office this year; Won Ok-geum, head of a Vietnamese community in Korea and director of nonprofit organization With Immigrants; and Seo Jeong-rae, head of the merchants group of Mangwon Market in western Seoul.

“The elderly have their own tips and advice that span from their lifetime of experience,” Han said. “And these can be very helpful to the young adults and young families. I wish to make the world a better place by bridging the two generations together.”

The 14 honorary mayors will be participating for a year in city government meetings to assist in drafting relevant policies and will act as representatives and advisors in 14 fields, ranging from immigration and women’s empowerment to child advocacy and arts and culture. According to the city government, the honorary mayors will be able to make policy suggestions directly to Mayor Park.

Seoul city government had been selecting honorary vice mayors from 2012, and this year changed the title to honorary mayors, extending the fields of expertise that mayors represent.