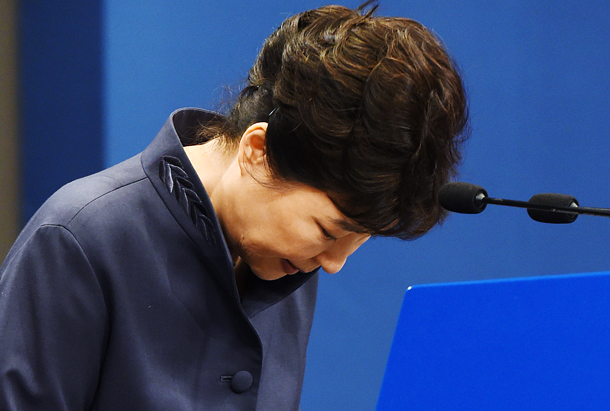 The Greek philosopher Heraclitus once said, “Character is your destiny.” As Korean politics drifts to nowhere, I am reminded of an episode with U.S. President Barack Obama, who has become a successful leader and has perhaps the greatest character among leaders in recent times.

When the U.S. presidential race was heating up in the autumn of 2008, Obama, then the Democratic nominee, disappeared into a gym around 3 p.m. almost every day accompanied by only one aide, despite a hectic schedule. He was carrying a large sports bag, and his security guards surrounded the entire building. In Washington’s political arena, rumors spread that Obama was meeting with a secret mentor for one hour to discuss campaign strategy.

It was later confirmed that Obama was simply playing basketball with his aide for an hour every day to relieve himself from the pressures of the presidential race. Despite the relentless schedule and pressure, he was capable of working out for one hour each day. He relieved his stress in the most normal and practical way, and this character helped him become a president who accomplished major achievements during eight years in office and has helped him enjoy high popularity at the end of his term.

Of course, Obama had an inner circle. He had Valerie Jarrett, a close friend with whom he consulted on almost everything, including his presidential bid. After his inauguration, Obama appointed her as a senior adviser to the White House and consulted with her publicly and formally.

Korean society has sustained a great shock after the Park Geun-hye administration was hit by a scandal that revealed her confidante had wielded wide influence in state affairs. We are deeply skeptical about our country’s standard for democracy and our ability to operate a democracy.

Referring to Obama’s episode is not to compare the sophistication of American democracy with our brutal political reality. Even in the United States, where the presidential system’s meticulous procedures have matured over 200 years, one’s character decides the success of a president over any other systemic mechanism, and Obama’s eight years is a classic example.

Born from a minority family and raised by his single mother and grandparents, Obama could have suffered psychological issues. But he overcame hardships and has been evaluated as a president with the strongest mentality and healthy, balanced character. His great character has led him to a successful eight-year presidency based on two factors.

First, he had a strong sense of balance and judgement and an ability to recognize his role and place in history.

Second, he followed public and transparent protocol to make all decisions ever since he was a candidate, fighting the temptation to use personal relationships.

As we witness the crisis management process of the Park administration, we will experience depression, rage and frustration. It is a rational path for us citizens to take to be angry and frustrated, and we must use it as an opportunity to change our politics rather than ruin our community. We must learn a lesson from Obama’s success to judge our own failure and also plan our future.

Right now, people are demanding Park give up her Saenuri Party membership and form an emergency cabinet. At the same time, we must give serious consideration to assessing our next leaders.

The first issue will be, of course, character. We must ask if United Nations Secretary General Ban Ki-moon has the character to make speedy and bold decisions at critical moments, and overcome his decades-long tendency to exercise prudence as a diplomat. We must ask if Moon Jae-in has the will and independence to overcome the giant shadow of former President Roh Moo-hyun and lead Korea with his own vision.

Another issue to consider is Korea’s political culture in which policy making processes won’t change much even after a campaign ends and a candidate becomes president. Thus, we must ask another question: is the decision-making process of Moon’s campaign, which has already recruited hundreds of experts, democratic and open to properly reflecting the trends of our society? Does Ahn Cheol-soo like to listen to the opinions of his aides, or does he just talk himself during meetings?

Presidential contenders must clearly answer these questions on their own character as much as they condemn the Park administration.
That is the only way to give hope to the people and ease our deep despair and frustration.


*The author is a professor of political science at Chung-Ang University.