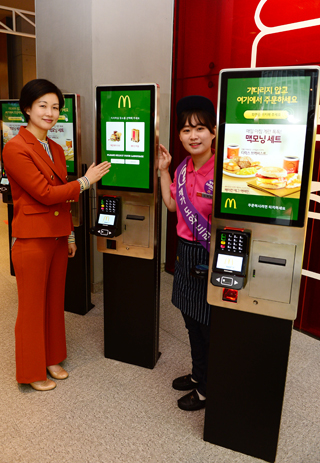 The Sangam branch of McDonald’s in western Seoul, where customers can make orders on touchscreen displays without having to wait in line. [NEWSIS]

Maeil Dairies, a major player in Korea’s dairy industry, withdrew its bid to acquire McDonald’s Korean operation on Wednesday, leaving the deal with no current bidders.

The reason for the pullout is said to have been failure between the two parties to come to an agreement on contract terms and acquisition price, which was speculated to be 600 billion won ($520 million).

Maeil initially teamed up with American private equity fund Carlyle Group to form a consortium for the acquisition. The share ratio was reported to be three for Maeil and seven for Carlye Group.

Along with its operations in China and Hong Kong, McDonald’s global headquarters in the United States put its Korean operation up for sale around April this year. The fast-food chain currently has over 2,800 restaurants across the three markets, of which 430 are in Korea.

Until now, McDonald’s in Asia has been managed directly by the global headquarters via local offices. McDonald’s has been looking to pass on operating rights to local companies and in return receive commission fees for using the brand.

Former candidates for the deal included CJ Group and a consortium comprising KG Group and NHN Entertainment. Both pulled out early after determining that McDonald’s conditions would be too heavy for them.

For Maeil Dairies, the deal was part of the company’s move to expand its restaurant business as a way to counteract a declining milk market. Restaurants chains owned by Maeil include coffee chain Paul Bassett, Italian restaurant chain The Kitchen Salvatore and Chinese restaurant chain Crystal Jade.

If Caryle Group wants to continue with the McDonald’s Korea deal, it will have to seek another partner. The American equity fund is also bidding for the China and Hong Kong operations in partnership with local companies.