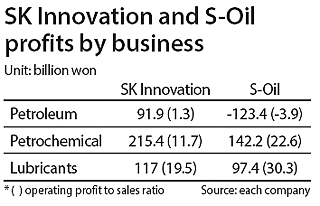 Low crude prices continued to hurt leading Korean oil refiners in the third quarter, earnings reports show, but the companies were able to hold up performance thanks to investments in nonpetroleum businesses including electric-vehicle batteries.

SK Innovation, the holding company of the country’s largest refiner, SK Energy, reported Friday that profit from their petroleum business fell over 600 billion won ($524 million) compared to the previous quarter. Petroleum had accounted for nearly 60 percent of the company’s profit during Q2, but the portion was reduced to 22 percent in the July-September period.

SK Energy posted 91.9 billion won in quarterly profit from 7.025 trillion won in revenue. “Operating profit fell from the previous quarter due to lower refining margins and reduction of gains from inventory,” said Cha Jin-seok, head of the finance division at SK Innovation.

Refining margin refers to the difference between the wholesale price of oil products that a refinery produces and the value of crude oil from which they were refined. While the margin is volatile to various factors including international oil prices and global supply, the margins showed “sluggish trends due to increased [oil product] supply from higher global [factory] utilization rate,” the company said during a call Friday with analysts.

Inventory refers to the oil supply a refinery holds for the two to three months between the import of crude oil and refining. The value of the inventory depreciated in the third quarter based on oil prices in September, which were lower than in June when accounting was done for the second quarter, as well as a stronger Korean won.

Like SK Energy, S-Oil cited “low refining margin and diminishing inventory gains from the previous quarter” as major reasons for the sluggish performance in oil refining.

The companies are nonetheless projecting an improvement in refining margins following an anticipated drop in global inventory levels and a seasonal pick-up in demand.

“The fourth quarter is usually a favorable season for refiners as oil consumption increases for heating in the winter,” an S-Oil spokesperson said. “We also see little chance of increased utilization of oil-refining facilities [which will help reduce supply].”