Retailers cook up promotions for Halloween

Retailers cook up promotions for Halloween 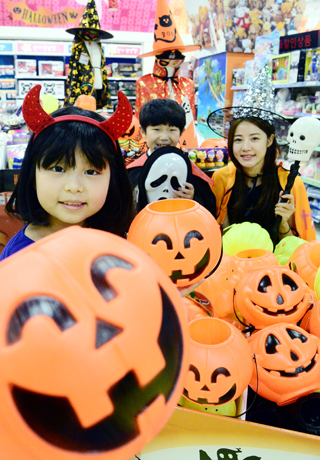 Lotte Mart has been selling Halloween-related products since Monday, including a Count Dracula cape for 9,000 won (8 dollar) and a jack-o’-lantern candy basket for 3,500 won. [NEWSIS]

Halloween might not be part of traditional Korean culture, but a younger, more open generation has been eager to embrace the holiday with all its costume revelry and late-night partying.

As a result, retailers, hotels and even bakeries are coming up with marketing strategies and promotions related to the Western holiday.

“Because more and more young people are celebrating and partying on Halloween as a major event, especially in kindergartens and schools, the retail industry is grateful for it,” an industry insider said.

Homeplus has released 100 Halloween-themed items including accessories, props, costumes and sweets. The discount retailer is selling magicians’ capes and T-shirts with skulls, pumpkins and ghosts printed on them. Also available across Homeplus’ 117 branches are costumes of Marvel and Disney characters like Iron Man and various Disney princesses. Customers who purchase over 30,000 won ($26) worth of goods (excluding Halloween costumes) will also receive a Halloween-themed shopping bag.

Another major retailer, Lotte Mart, along with 37 Toys “R” Us branches located inside their stores, has released 150 Halloween-themed products.

Other promotions include discounts on costumes and props sold on online shopping sites like G-Market.

And it’s not just retailers getting in on the Halloween fun. Bakeries and fast-food joints are also coming up with ghoulish treats themed around the holiday.

Tous Les Jours, CJ Foodville’s bakery franchise, is selling limited-edition baked goods including three cakes (one of which is called “Ghost Horror Town” and is covered with black cookie cream) as well as a ghost-shaped meringue and coffin-shaped Danish rolls.

Burger King is selling their signature chicken fingers inside special Halloween containers until just before Halloween day on Oct. 31.

Hotels are also jumping on the Halloween bandwagon. The Grand Hyatt Seoul threw a party for adults last Friday and Saturday themed around “Alice in Wonderland,” and the hotel plans to hold the event one more time this weekend. The party will feature a costume contest and live concert by a music band and DJ.

The Walkerhill, owned by SK Networks, is partnering with SK Broadband to jointly throw a Halloween party for kids. The hotel will provide youngsters a chance to wear free costumes, watch Halloween cartoons and make their very own cupcakes.