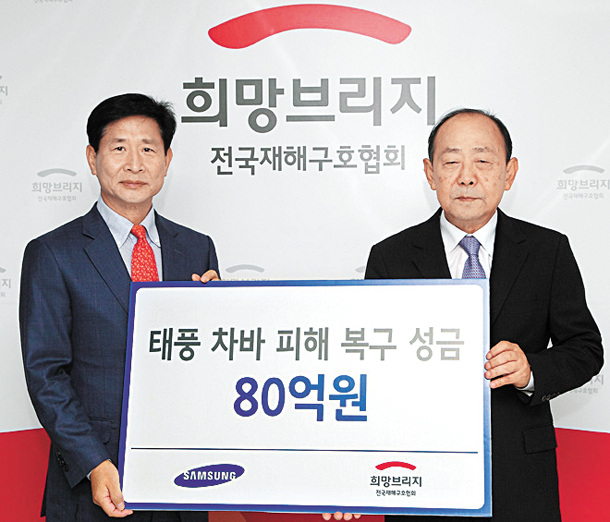 Samsung Group has donated 8 billion won ($7 million) to the Korea Disaster Relief Association to support recovery efforts in the aftermath of Typhoon Chaba.

The company held a ceremony to deliver the funds at the headquarters of the disaster relief association in Mapo District, western Seoul, where Yoon Ju-hwa, president of Samsung Corporate Citizenship, and Choi Hak-rae, president of the Korea Disaster Relief Association, were present.

The funds will be used to speed up recovery efforts in the country’s southern region, which was hit hard by the typhoon earlier this month and suffered major damage.

Samsung Life plans to postpone insurance premiums and interest payments for six months starting from October for customers suffering from the typhoon.

Samsung Card will also postpone credit card payments on charges from October to December for up to six months. During this period, recipients of the benefit are exempt from interest charges on credit cards and loans.

Since 1998, Samsung Group has been giving out relief funds totaling 51.95 billion won for victims of natural disasters, including Typhoon Bolaven and Typhoon Tembin in 2012, the nationwide rainstorms in 2011, the snowstorm in the southwestern Honam region in 2005 and Typhoon Maemi in 2003.