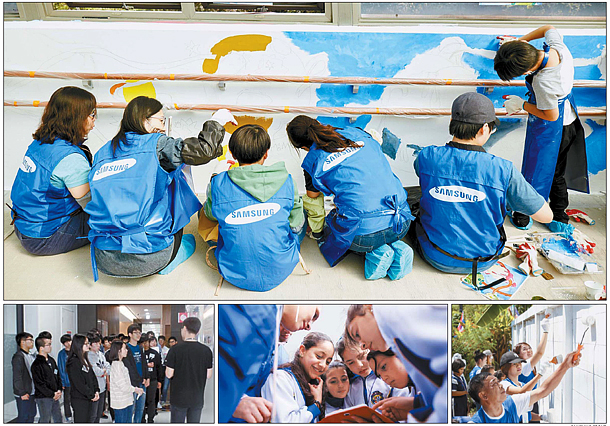 Samsung Group held its 22nd annual Samsung Global Volunteer Grand Festival for three weeks from Oct. 4 to 24, with participation from 160,000 of the company’s staff members and executives spanning across 26 countries.

More than 2,200 groups of volunteers comprising Samsung staff, their families and local residents took part in the festival.

The Global Volunteer Grand Festival began in 1995 and up until 2010 was mainly held in Korea. Starting from 2011, offices abroad began taking part in the event as well, and the accumulated number of foreign participants has reached 100,000.

Samsung Electronics America designated Oct. 14 as a volunteering day. In the United States, 3,200 staff members and executives visited 21 social welfare institutions in New Jersey, California and Texas to take part in various activities such as distributing food, after-school teaching and cleaning up parks and rivers.

This year was Samsung Electronics America’s third volunteering day since its first in 2014. More than 10,000 staff members and executives of the company’s U.S. operation have participated in volunteer activities since.

In Latin America, 30 staff members and executives from Samsung Electronics Colombia visited middle schools in Bogota for two days from Oct. 4 to 5 to introduce the latest gadgets, such as Samsung’s tablet PC and the company’s Gear smartwatch. The team also advised the schools on how to make use of educational mobile apps.

On Oct. 13, workers at Samsung Engineering Mexico visited a local elementary school to teach students about the principles of energy and carried out an experiment to create a solar energy house.

In Asia, Samsung Group China held a walking competition on Oct. 20 to raise funds for patients with heart disease. Eight hundred staff members and executives participated. A donation drive to collect secondhand clothes for needy families in western China was held as well.

Staff members and executives of Thai Samsung Electronics visited an underdeveloped elementary school in the southern part of Thailand to perform maintenance work, painting the school building and playground and repairing floors.

Afterward, the volunteers participated in the school’s field day and played games with the students.

In Korea, the birthplace of Samsung, 140,000 staff members and executives donated their talent to local communities across the country and lent a hand to residents in farming and fishing villages.

Throughout the month, 200 staff members and executives from Suwon Samsung Digital City held nine career days for middle and high school students where they talked about their work in software development and marketing.

On Oct. 8, 80 workers from Samsung Fire & Marine Insurance visited Seoul Jungjin School, a special school for mentally-challenged children, to paint murals on the walls of the school’s classrooms, hallways and cafeteria.