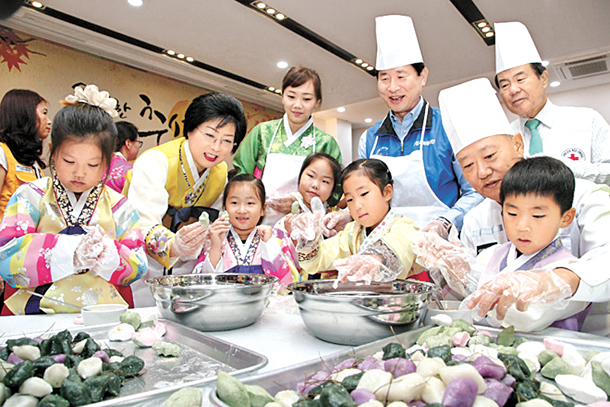 Samsung Group holds a donation ceremony on Sept. 8 at the Gyeonggi headquarters of the Korean Red Cross to deliver groceries and make songpyeon, a crescent-shaped rice cake traditionally consumed during Chuseok, with multicultural families. [Samsung group]

In celebration of the Korean harvest festival Chuseok, Samsung Group held a donation ceremony on Sept. 8 at the Gyeonggi headquarters of the Korean Red Cross to deliver 1 billion won ($880,000) worth of groceries to social welfare centers and needy neighbors across the country.

Samsung Group staff and executives along with volunteers from the Korean Red Cross visited 1,730 social welfare organizations and 37,162 impoverished homes to deliver boxes containing groceries such as flour, soybean paste, soy sauce and sesame oil and partake in volunteer activities.

Multicultural families living in Suwon received presents during the ceremony and were invited to make traditional Korean food like songpyeon, a crescent-shaped rice cake traditionally consumed during Chuseok.

Each affiliate of Samsung Group also carried out sharing activities independent from the group to celebrate Chuseok with local communities.

On Sept. 6, 300 staff members and executives of Giheung Samsung Nano City made 1,004 kilograms (2,113 pounds) of songpyeon and delivered them to senior citizens living alone in the cities of Yongin, Hwaseong and Pyeongtaek in Gyeonggi.

Since 2008, Samsung Group has held a volunteer campaign every year to celebrate Chuseok and the Korean lunar new year holiday Seollal. Through the annual campaign, the group has donated a total of 16.5 billion won to date.