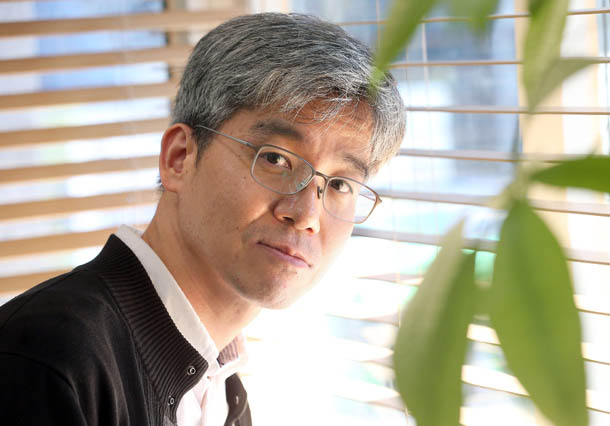 Yoon Hong-gyun, a psychiatrist and author of “Self-esteem Lecture,” says that to enhance one’s self-esteem one should not dwell on the past. [CHOI JEONG-DONG]

How to restore one’s self-esteem is the central topic of a book titled “Self-esteem Lecture,” a bestseller that has sold over 80,000 copies.

Yoon Hong-gyun, the 40-year-old psychiatrist who wrote the book, used to communicate with the public and his patients through his blog and by e-mail, but this is the first time that Yoon has published a book.

The JoongAng Ilbo sat down with the author to discuss self-esteem and people’s growing interest about the issue at his clinic in Mapo District, western Seoul.

As for why so many people pay attention to this issue, Yoon cited the lack of social mobility.

“In the past, one was considered to be successful if he or she got a decent job after doing well at school,” he said. “But now it’s hard to land a good job even if one graduates from a prestigious college, and even if one manages to get into a big corporation, the future is filled with uncertainties.”

He went on to say that “Now the standard that defines success and happiness has become more blurry and that makes people constantly worry if they are headed the right way.”

Some often think of self-esteem as self-efficacy, or the extent to which one is confident in one’s abilities, but self-esteem also encompasses a sense of one’s own worth, regardless of achievement.

“Many say that young people these days are too confident and somewhat narcissistic,” he said, “Deep inside, the tendency stems from low self-esteem and the fear something would embarrass them.”

Yoon became more concerned with the issue of self-esteem while working at a hospital in Gyeonggi.

“When I sift through medical records of patients, I realized that people who restored their self-esteem showed great recovery,” he said, “Feeling uncomfortable, addiction and depression were all related to their self-esteem.”

In the book, he listed 40 ways to improve one’s self-esteem that he employs at his clinic. The training includes listing one’s strengths and weaknesses and compartmentalizing one’s thinking, behavior and feeling.

“Many people think that self-esteem is determined by childhood experiences and affected by genetic elements, but that is not really the case,” he said. “One can restore self-esteem by oneself. I’ve seen tangible improvements by people who disregarded themselves as losers.”

He suggested that people with low self-esteem should actively find ways to restore their perception.

“Things will not improve if one just sits back and does nothing,” Yoon said, “People can start with small things, such as smiling and talking positively.”