Wrestler celebrates life of his mentor

Wrestler celebrates life of his mentor 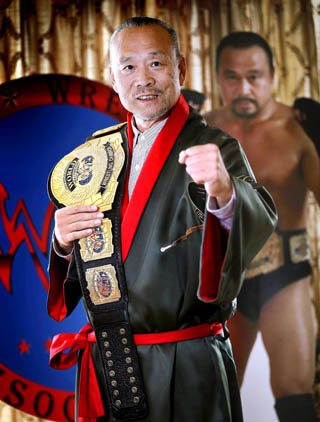 “It was as if a mountain was sitting right in front of me - I could hardly make eye contact with him,” Lee Wang-pyo, representative of the World Wrestling Association, said as he recounted his first meeting with his mentor, Kim Il.

Lee received an operation for biliary tract cancer in 2013 and held his retirement ceremony last year at Jangchung Gymnasium in Jung District, Seoul. “I decided to plan for the competition on the 10th memorial of Kim’s death,” said Lee, “and it took me two months just to contact the competitors myself and liaise for sponsors.”

In 1975, Lee was first introduced to wrestling in one of Kim’s wrestling classes. Kim at the time was known for his signature headbutt. Lee said, “Kim always emphasized patience, saying you can’t be a wrestler without it.”

Showing off a wrestling robe embroidered with a tiger, he said, “Kim gave me this robe, which he wore at competitions, and it made me feel like I had earned my mentor’s recognition.”

Lee also expressed frustration with the current state of professional wrestling, which has lost popularity as more fans are watching mixed martial arts these days. “It’s not easy nowadays to hold a professional wrestling competition,” said Lee, “I have regrets for not being able to popularize wrestling, although it’s been 10 years since my mentor passed away.” But Lee said he survived three operations to live up to Kim’s expectations, and has yet to give up.