Choi hires a lawyer and says she will cooperate

Choi hires a lawyer and says she will cooperate 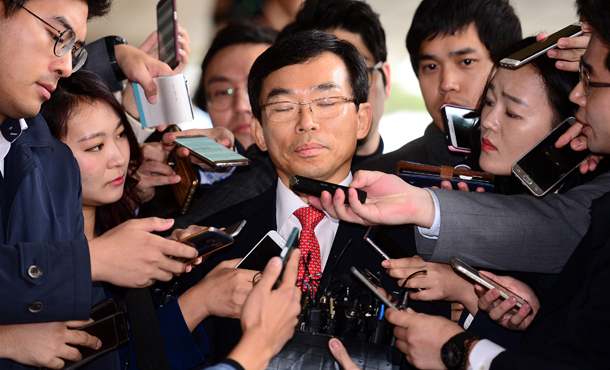 Federation of Korean Industries Vice Chairman Lee Seung-cheol, center, is summoned on Friday to be questioned by the Seoul Central District Prosecutors’ Office about allegations that Choi Soon-sil strong-armed conglomerates to make massive donations to two nonprofit foundations and misappropriated the money. [NEWSIS]

Choi Soon-sil, a friend of President Park Geun-hye facing corruption accusations, appointed a lawyer on Friday and expressed her intention to cooperate with the prosecution’s probe.

Lawyer Lee Kyung-jae said he was hired as an attorney to defend Choi and her daughter, Chung Yoo-ra. “Choi is aware of the gravity of the situation,” he said. “If the prosecution summons her, she will show up and testify the truth.”

Following allegations that Choi used her influence on state affairs and strong-armed conglomerates to create slush funds, the prosecution has launched a special investigation team and is investigating the scandals.

“My client and I believe that laying bare everything at the prosecution’s feet is the way to resolve suspicion and end society’s chaos,” he said.

Choi and Chung are currently staying outside the country. She was recently in Germany when she talked to a newspaper to plea her innocence. But she refused to come to Korea, citing poor health.

The special investigation team at the prosecution continued its probe earlier Friday. Vice Chairman Lee Seung-cheol of the Federation of Korean Industries was summoned and questioned on allegations that Choi had strong-armed conglomerates to make massive donations to two nonprofit foundations and misappropriated the money. The largest business lobby group was accused of acting on behalf of Choi in the fundraising activities.

Ko Young-tae, a close associate of Choi, was also questioned by the prosecution since Thursday night. He made a bombshell revelation earlier this month in an interview with the JTBC that Choi had reviewed and edited Park’s speeches.

After the scandal broke, he remained outside the country, but returned to Korea Thursday night and voluntarily submitted to questioning.

Meanwhile, the National Assembly’s discussion over whether to appoint an independent council to investigate the scandal broke down Friday, as the main opposition party decided to end negotiations.

The main opposition Minjoo Party of Korea said earlier this month that an independent council must be appointed to probe the scandals, questioning the integrity of the prosecution. After President Park issued an apology on Tuesday, the ruling Saenuri Party also held a general assembly of lawmakers on Wednesday and decided to accept the independent council probe.

While the Saenuri Party said the existing independent council system established in 2014 should be used to investigate the scandals, the Minjoo Party said the National Assembly should pass a separate law to conduct a more thorough and independent probe by appointing a special prosecutor because not only Choi, but also Park and the Blue House, must be investigated.

Chairwoman Choo Mi-ae of the Minjoo Party said Friday that the party will not participate in the negotiation any further, unless three conditions are met first. She demanded that the Saenuri Party issue a public apology and Woo Byung-woo, senior civil affairs secretary to the president, step down. She also said everyone holding public office who assisted Choi must come clean and resign. The Minjoo Party added that it will create its own blacklist of Choi collaborators if the Saenuri Party does not accept its demands.

“We’re not pushing for an impeachment or demanding Park’s resignation, but we’re of the perspective that the opposition parties must handle this sternly,” said Rep. Woo Sang-ho, floor leader of the Minjoo Party. ”We will wait and see how the Saenuri Party and the Blue House respond.”